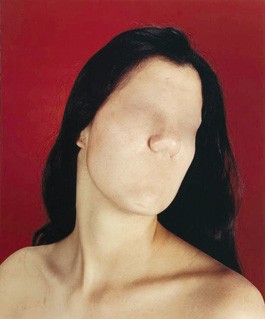 What Is the Self?

Two portrait exhibits reflect life as we don't know it

“This is where the mouth was,” exclaimed the six-year-old boy at the opening reception, jumping and pointing to Aziz & Cucher’s portrait Maria, “and these were her eyes, here!” His sister, rumpling her face at the former eye sockets, nostrils and mouth all covered in skin, was less enthusiastic: “It’s kinda creepy.”

For all the big names at Personal Identities, the portrait exhibit at SSU’s University Art Gallery, it’s the lesser-known work that elicits the strongest reaction. While Chuck Close, in a large, looming aquatint, stares down at Robert Bechtle’s self-image in charcoal, the beautiful weave of color that is Kehinde Wiley’s Dwayne looks on from across the wing. In a corner devoted to icons, Andy Warhol’s Richard Nixon and Marilyn Monroe hang opposite Ray Beldner’s incredible image of Mick Jagger, intricately sewn together with folded dollar bills.

Attracting works by Robert Arneson and Eric Fischl is no easy task, logistically, and curator Michael Schwager has with Personal Identities shown determination, taste and, in a lengthy essay for the program, exemplary passion for the portrait. The show stays up until Dec. 12 at University Art Galley, 1801 E. Cotati Ave., Rohnert Park. 707.664.2295.

Curated by Catherine Devriese at ArtSpace 404, Line Up bends the rules of the self-portrait even while devoting an entire wall to its history. Artists have rendered themselves either in straight portraiture or, in the case of Lin Max’s . . . having awaited this advice, a book of sewn-together maps, death certificates, sheet music and sepia photos. Carla Sarvis lists life’s hallmarks, Genevieve Willson Barnhart utilizes old business cards and Janet Charnofsky admits coyly that she’s always wanted to play for the 49ers.

In works like that by Emily Payne, Line Up especially succeeds. Payne mirrors her life in wonderful fine-point line drawings of post-it notes to herself, a bag of tomatoes, a textbook, a sneaker, all framed in gray thread. Though no faces appear, the sparse glimpses remind the viewer of the parts that make the whole. Line Up runs through Dec. 12 at ArtSpace 404, 404 Mendocino Ave., Santa Rosa. 707.579.2787.