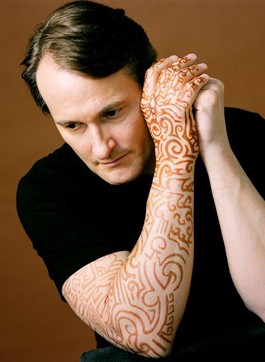 For Christopher O'Riley, there are no fixed gears

From the Top: Christopher O’Riley remains alive to surprise.

Christopher O’Riley laughs out loud when he learns he’s being billed as a “hipster” pianist. The laugh transforms to a full-blown wince when I propose a series of questions to determine just how accurately he fits the title. “Oh no, no!” he cries into the phone. “I’m gonna fail miserably!”

But he’s game, and we dive right in. How many mesh trucker hats or tight jeans does O’Riley own? None. Does he drink Pabst Blue Ribbon or ride a fixed-gear bike? No. Does he have Pitchfork bookmarked, does he have any tattoos or has he complained about gentrification in his neighborhood in the past two weeks? No, no and no.

Christopher O’Riley, as predicted, has triumphantly failed the hipster test. Not one to adhere to a single genre, O’Riley blazes a unique trail by recording classical piano interpretations of the music of Radiohead, Nick Drake and Elliot Smith, which explains the ill-fitting “hipster” tag. It’s not unlikely to overhear twenty-somethings in duct-taped Converse and studded belts praise his intriguing arrangements, which staunchly avoid Muzak’s lull and extract instead the inherent complexity of the songs. Yet O’Riley’s heart is in his classical training; give the Ohio-born pianist a chance to expound on Béla Bartók, whose Piano Concerto no. 3 he performs April 12–14 with the Santa Rosa Symphony, and he lights up in excitement, pleased to discuss the Hungarian composer.

“I feel like I’m playing Brahms when I’m playing Bartók’s third,” O’Riley explains (coincidentally, Brahms’ Symphony no. 1 is also on the program this weekend). “It has elements of Mozartian clarity and purity, in a very spare and idiomatic language, and also an extraordinarily ingenious way of working with material. Brahms’ later solo pieces for piano are good examples of exactly that motivic development—not eschewing melody, but evolving a much more cellular basis.”

Bartók’s third, O’Riley says, isn’t the thundering horde of Bartók’s first, nor does it contain the accessible athleticism of Bartók’s second; rather, its economy of means demands a delicate treatment. “I would see as much challenge in stating the first theme, between two unison hands, and really getting as much information into that shape,” O’Riley says, “as any technical thing in the piece.”

O’Riley slightly resembles a young Bartók, and considering that Bartók was an avid ethnomusicologist and collector of then-contemporary folk music, the connections between the two grow deeper. Collecting Radiohead songs for his repertoire, says O’Riley, confused many in the classical world at first (“There were all these bemused and lost-looking people who had no idea what I was doing!”), and he remains distressed by just how traditionalist the classical establishment can be. “It’s sort of sad that some people can be threatened by musical choices,” O’Riley sighs.

“Beethoven once said,” he quotes as if to fault the closed-minded, “that ‘aside from love, the thing I love most, about anything, is surprise.'”

Adding to the contemporary rock and pop artists he’s recorded, O’Riley has recently arranged the songs of the Cocteau Twins, a lilting British group, and Guided by Voices, an exhaustively prolific indie-rock band from his home state. Iconoclastic jazz pioneers the Bad Plus, naturally, are among O’Riley’s good friends (“They’re amazing guys, all three of them,” he says, “they’re like the Beatles”), and he’s brings his fresh open-mindedness to the masses as host of NPR’s classical-music program From the Top.

Considering that Bartók’s third piano concerto was composed at death’s door, and Nick Drake and Elliot Smith both met untimely deaths whose rulings as suicide are still, to this day, questioned, is O’Riley, in being drawn to their work, obsessed with human tragedy? “No, not so much tragedy,” he clarifies, “as the widest possible emotional or expressive palette.”

“A lot of literature, and some music, resides either in the total and worst emo threshold, or in a bubblegum world,” he says, obviously ill at ease with such divergent paths. “And I think people like Elliott Smith, Nick Drake and Radiohead acknowledge what I think Butters [from South Park] said best: ‘If I hadn’t been so happy at some point, I wouldn’t be this depressed now.'”