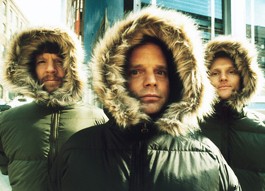 T hose who noticed that the summertime activity at Petaluma’s Mystic Theatre was a little on the slim side may want to simply camp out in front of the place for the next few days. Thursday, Nov. 13, brings a sold-out show by John Hiatt , who’s always brilliant, funny and charged with the redemptive power of love. Guitar miracle Sonny Landreth isn’t in his band this time around, and Hiatt hasn’t made a grand slam of an album in a while, but he’s still worth lurking on the sidewalk and trying to pick up an extra scalped ticket.

The next night, Nov. 14, Ozomatli returns reunited with the MC who started it all: Jurassic 5’s Chali 2na. Responsible for energizing the band’s vibrant self-titled 1998 debut, 2na brings with him the ability to elevate any recording or performance with his distinctive deep baritone and asymmetric rhyming scheme.

Saturday, Nov. 15, is given over to the all-female cover band, AC/DShe . Forget AC/DC’s long-overdue new album, Black Ice —everyone knows it was all about Bon Scott. That’s the era AC/DShe focuses on, and with a comprehensive set list, they prove the only difference between the Australian originals and their close facsimile is lipstick.

The next night, catch a fire with Groundation , whose long sets and irie vibes are spearheaded by singer Harrison Stafford’s long vocal improvisations. They’ve been around the world, they return to the Mystic on Sunday, Nov. 16.

Take five on Monday night, but return Nov. 18 for Medeski, Martin & Wood , the extremely versatile soul-jazz trio currently on tour honing material for their upcoming album. Though most of their recorded output consists of tight grooves, MM&W get exploratory in concert; jazz fans shouldn’t miss them.

And finally, the next night, Nov. 19, still reeling from his short-lived stint in the re-re-revamped Guns ‘N Roses, it’s the KFC-donning wackjob and shredding guitar wankmeister Buckethead .