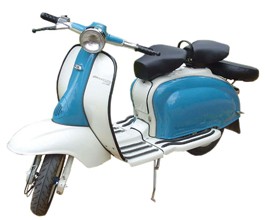 In which a penny-pinching gal hops right on a scooter, rides to the coast and falls in love

I’ve always thought of scooters as kind of dorky.

No matter how many stylish Italians ride Vespas around Roman streets for cappuccinos and cafe conversation, there’s something about the way you have to sit on the buzzy little things, perched and upright, like a Midwestern schoolteacher or something. It just isn’t cool.

So it’s with reluctance that I go to the DMV to pick up the “California Motorcycle Handbook.” I need it to pass the written test for a Class M motorcycle permit, which will allow me to legally drive a scooter, and in preparation, I head over to Revolution Moto, the scooter shop in downtown Santa Rosa owned by Roy and Johnna Gatinella since 2003.

“There’s a dork factor, definitely,” says Johnna, laughing. “It’s not like you can get on and be thinking, ‘I am a total bad-ass.’ You just have to be like, ‘Yeah, I’m giving it up. I’m on a scooter.'”

And yet the Gatinellas, and their customers, are part of a growing segment of Americans embracing scooters as an alternative to cars. According to the Motorcycle Industry Council, U.S. scooter sales jumped 50 percent for the first quarter of 2010, compared to 2009.

“We’re trying to shift people’s viewpoints on how they travel,” says Roy as we sip water and lemonade outside the shop. Jerry Bender, husband of