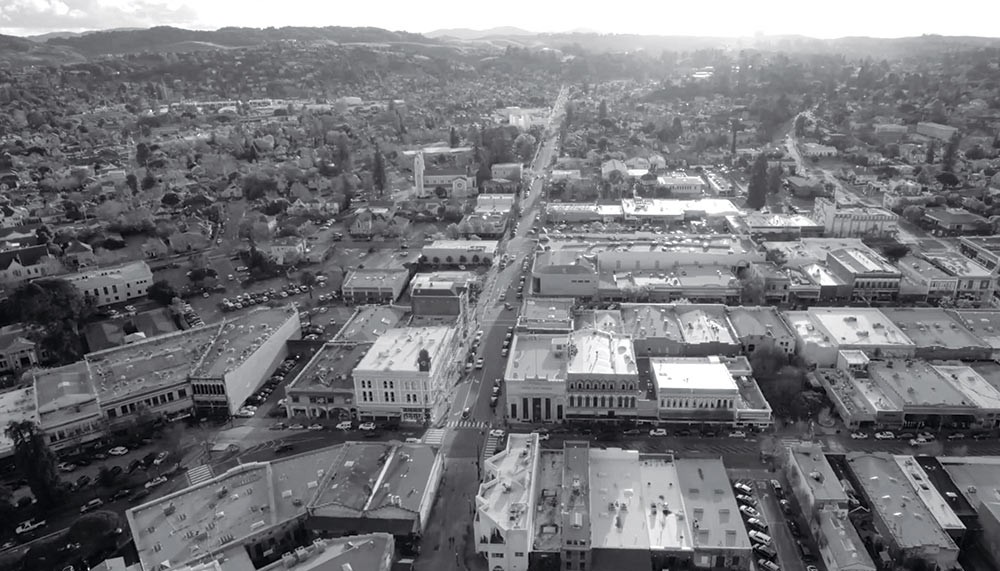 After a drug overdose, art student Theda becomes an unwitting participant in her university’s experimental psychology program. Undergoing a new drug therapy, Theda begins to see the branching possibilities of reality, experiences alternate universes and contends with a doppelganger. Determined to escape the therapy, Theda mentally travels through a looking glass of quantum physics and ultimately must look into her own nature.

That’s the audacious plot of the new feature film, Pill Head, which dives into the deep end of cinema’s absurdity pool with arthouse flair. Conceived of, produced and filmed almost entirely in Petaluma, Pill Head is the latest creation from producer Karen Hess and writer-director Daedalus Howell, who collaborate on outside-the-box interactive art experiences in their ongoing endeavor, Culture Department.

“We created Culture Department as a vehicle for our projects,” says Hess.

“As a way to contain them,” says Howell.

Pill Head is by far the pair’s most ambitious project yet, and the film unintentionally turned into a love letter to the filmmakers’ hometown.

Pill Head is set within Howell’s fictional take on Petaluma, “Lumaville,” a sleepy Northern California college town in the grips of a startup boom that was also the setting for his 2015 sci-fi novel Quantum Deadline.

In addition to the themes of identity and mental health, Pill Head also wrestles with notions of nostalgia and redemption.

“I was interested in the possibilities of one’s life, and how every possibility could be realized if we had enough time,” says Howell. “I really enjoyed the idea of somebody who had crossed one step too far, and how far back the journey back would be.”

In the case of Pill Head, it’s college student Theda, brilliantly played by actress and Petaluma native Emily Ahrens (now Emily Tugaw), who takes one dose too many and finds herself in a drug-induced wonderland of possibilities.

“When I read it, I really loved it,” says Hess. “It had a different vibe to it and I wanted to make sure it happened.”

“Karen is great to work with because she’s super supportive,” says Howell. “She’s able to not just see a vision, but to complement and amplify a vision.”

Conceptually, Pill Head is a movie that plays out like a memory; nothing is exactly as it seems, but rather as it is remembered.

“There’s a theme of nostalgia, but it’s not pure nostalgia,” says Hess. “We’ve had people comment that the film reminds them of when they were young, but from different eras.”

“There’s something in the film that allows people to project a vision of their own youth to a degree,” says Howell.

For the Petaluma-born Hess and Howell, who have seen the city’s transformation from farm town to bustling hub, Pill Head is also a snapshot of the town as they see it today.

“This film is a time capsule,” says Howell.

Howell and Hess are also very aware of the history of filmmaking in Petaluma, and part of the impetus of Pill Head was to revisit Petaluma locations that were used in films like American Graffiti and Peggy Sue Got Married and, as Howell puts it, to reclaim them.

“Petaluma is like our own back lot,” says Howell. “We went to Paramount studios at one point scouting, really just hanging out in the lot, but they took us to their alley set, and it was a dead ringer for American Alley.”

The brick-lined American Alley is featured in the film, as are other downtown locations like the recently reopened music venue the Big Easy (see Music, pg 23), the Petaluma Masonic Hall and David Yearsley River Heritage Center, situated along the Petaluma River.

The film also features cameos by local characters like Eli Lucas, a longtime fixture known for roller-skating through Petaluma dressed in a Unitard, curly wig and aviator sunglasses and carrying a boombox blasting disco music.

“That’s a touchstone of Petaluma that George Lucas forgot to get,” says Howell with a laugh.

Stylistically, the black-and-white feature takes its main inspiration from the French New Wave and films like Breathless and Cleo From 5 to 7 that employed handheld cameras and nontraditional staging to achieve a cinéma vérité aesthetic that’s akin to a documentary. Other inspirations came from the early work of cult film veterans Jim Jarmusch and David Lynch.

“That filmmaking production style seemed to suit our budget and timeline,” says Howell, who shot at 20 locations within Petaluma and Santa Rosa.

The filmmaking process was not without its challenges and the sheer amount of work almost overwhelmed the team, especially given that Pill Head started shooting in October 2017, when wildfires brought the North Bay to a standstill.

After a two-week break in shooting, Hess redid the production schedule, and shooting ran through the end of 2017.

From there, Howell and Hess spent months at the editing deck. As Pill Head took shape, additional post-production editors helped with technical aspects like giving the soundtrack a Dolby 5.1 surround sound mix.

“I think the movie transcends the sum of its parts, and a lot of it has to do with the energy that everyone brought to it,” Howell says.

Prior to a video-on-demand release on May 16, Pill Head is getting a limited theatrical run in the North Bay, with screenings scheduled for May 9 in Santa Rosa, May 13 and 15 in Petaluma and May 13 in Sonoma and Fairfax.

“There’s so many ways to see Petaluma that really pop on the big screen,” says Howell. “I don’t think Petalumans have seen Petaluma this way.”

Indeed, Howell and Hess began to see Petaluma differently during the making of the film.

“I didn’t realize how much I love Petaluma until I saw the film in its final cut,” says Howell. “Petaluma is weird, and there’s no way around it. And the artists here will always remind you and reveal to you how weird it is and how weird you are.”

“As much hipster shellac that gets dripped over this place, there is something, it’s in the water, there is something here that is vital and that cannot be obscured by whatever pour-over coffee trend may occur,” says Howell. “If we’re not keeping Petaluma weird, we’re at least keeping ourselves weird in Petaluma.”