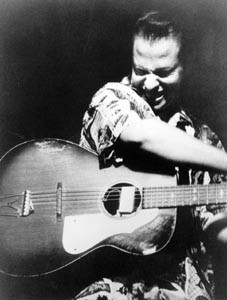 A musical journey into clean and sober twang

WAYNE “The Train” Hancock’s musical style is made of many parts, like a secret barbecue-spice dry rub or good chili. Honky-tonk sounds mix with swing horns and country courtliness, good humor and rock and roll. It all gets taken for a spin on the floor by Hancock himself, whose twang delivery, “gee-tar” stylings, and unapologetic enthusiasm are used to craft a sort of music that’s specifically American and distinctively his own.

Hancock’s road to semistardom hasn’t exactly been a direct one. After winning the Wrangler Country Showdown songwriting contest in 1984, he signed up for six years in Uncle Sam’s Marine Corps. (Hancock’s 1997 album, That’s What Daddy Wants, starts with a convincing horn version of “Reveille” that deftly swings into the title track.) After that stint ended in 1990 he was, not to put too fine a point on it, drinking and idly gigging his way through his native Texas. In ’93, though, Hancock quit drinking and landed in Austin determined to succeed, despite naysayers who told him his style of music would get him nowhere.

Hancock doesn’t squeeze his boozy past for drops of poignancy, however–his 1995 album, Thunderstorms and Neon Signs, contains the 12-step two-step “Double-A Daddy” (the title track was recorded last year by Hank Williams III). In that tune, Hancock explains to his baby, “You can dance all night till you fall on the floor/ Knock yourself out till you can’t stand it no more/ I’m a double-A daddy, I’m sober all the time.” The song’s such a swinging good-time stomp that you realize only in retrospect that “Double A” is Alcoholics Anonymous.

Much of Hancock’s work is firmly rooted in the American Western tradition of music that’s sad but happy. That’s What Daddy Wants contains a song called “Misery,” but the track has such stylized lap steel guitar and hip-swinging Latin rhythm behind it that it makes you feel glad that Wayne feels like hell, if his sadness sounds this good.

Hancock probably feels pretty good lately; after Thunderstorm‘s independent release in 1995, he found a home at Ark 21, the micro-label run by ex-Police manager Miles Copeland. The release of That’s What Daddy Wants was so well received that Ark 21 promptly reissued Thunderstorms and Neon Signs in 1998. The critically acclaimed Wild, Free & Reckless followed in ’99.

Hancock has sweat beneath his swing and hard work under the honky-tonk; he tours constantly and, with the exception of the two covers that close each of his albums, writes all his material. Gershwin’s “Summertime” closes Neon Signs, and the Clash rave-up “Brand New Cadillac” rounds out Daddy. The fact that Hancock can embrace those extremes and celebrate them is a good starting point for understanding his style.

Hancock’s music evokes a time somewhere just after the invention of beer refrigeration and neon signs, where the highways aren’t multilane interstates but still take you wherever you want to drive, all night long.

If Hancock has a manifesto, it’s in his note on the back cover of Daddy: “This album was recorded live for many reasons: A.) It’s easier to sing with a band that’s in the groove . . . B.) Live music captures the emotion and high energy of the music . . . C.) This album was recorded and finished in three days, and it cost very little to make. Let’s see all you Music Industry cats beat that one.”

It’s pure Hancock: he loves music, he has a Texan’s aptitude for boasts and dares, and it sounds as if he’s having a hell of a time.