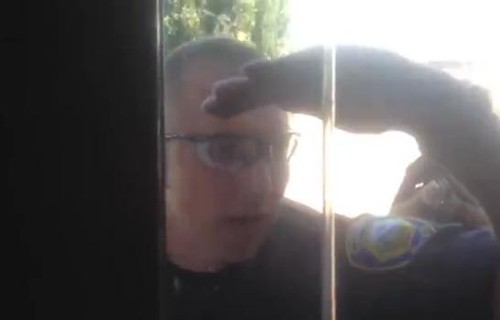 Just how private is your private life?

A video of Cotati police kicking in a door and tasing a man filming them has spread like wildfire around the internet, raising questions about citizens’ Fourth Amendment rights and excessive use of force.

Last week, when a neighbor called to alert Cotati police about an alleged domestic disturbance incident between James and Jennifer Wood, officers arrived at the couple’s front window. Speaking through the window to the police, the couple denied any domestic violence had been taking place, and refused the officers entry to their apartment, with James stating, “We don’t live in a police state, sir.”

Since it made the front page of Reddit last night, what happened next in the May 10 incident has been seen around the world:

Johnson spoke with James, and also with Jennifer, who said of the responding officers: “They could plainly see I was not in distress.” An administrative review of the officers’ actions will be taken, Parish said, but he defended the officers’ behavior and blamed the Woods’ “poor choice… not to cooperate with law enforcement.”