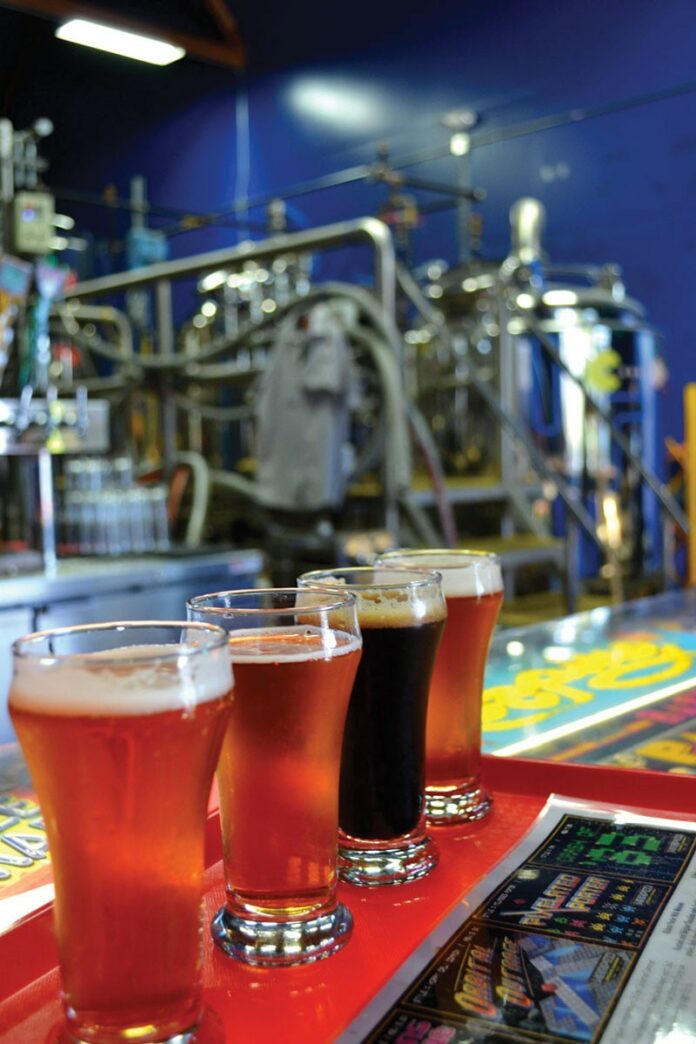 Sebastopol's Warped Brewing, a taproom worth a token

In the sense that, if you mention “orange wine,” which has nothing to do with oranges, mind you, be prepared for a maelstrom of controversy. Brew a beer with actual oranges—just because you can—and the response is more likely to be “Yeah!” Name the beer “Unicorns Are Real,” and it’s “Hell yeah!” Now that’s refreshing.

The unicorn theme is one of those obscure 1980s references that, according to employees at Noah and Mirjam Bolmer’s Warped Brewing Company taproom in Sebastopol, may or may not be revealed in due time. Meanwhile, Warped has become such a popular hangout that hours have been extended to seven days a week, even while the small bar seats fewer than 10, plus a few patio tables overlooking the Barlow retail district, which filled up quickly on a recent Friday afternoon by 5pm.

The theme is nothing like that of Barley and Hops, the popular Occidental tavern that the Bolmers also operate. Painted deep blue, with Pac Man–themed fermentation tanks, it’s all 1980s arcade games here. Remember Michael Jackson’s Moonwalk—the game? I don’t, either.

There’s no food for sale at Warped, although a bar of soap ($7) made from their beer by a third party smells so malty and sweet that one might be tempted to dig in after a flight ($9) of four samples, each 6 ounces. Quite a value.

Unicorns Are Magic is an orange-infused pale ale with a cult following, although it’s only in its second batch. The first was made with blood oranges stewed into the mash tun; the second, with Cara Cara navel oranges. But it has none of the overt fruity flavors, say, of some apricot ales. “That wasn’t the intent,” says assistant brewer Mark LaGris. Instead, it’s got a malty, cracked grain note, and a sort of distant, orangey inflection to the dry ale flavor.

Orbital Outrage, a California steam beer, is a warm-fermented lager that is frankly a bit more fruity than the Unicorn. Pixelated Porter has an ultra-burnt malt aroma, and is more smoky than chocolatey. For me, the champion is Crash of ’83 IPA—hella more fruity than the Unicorn, due to the dry-hopped addition of key hop varieties. There’s an almost butterscotchy richness underling the fruity hops, and while not drying, it’s not cloyingly sweet, either. This is a delightful IPA, served in a no-frills, fun place by folks enthused about their product. I hope that Warped earns extra lives.