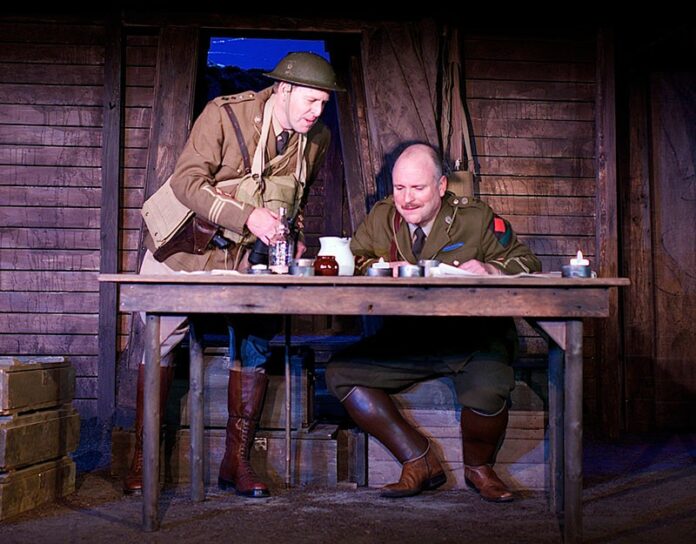 Banality, impatience on the front lines in stellar 'Journey's End'

There is nothing new about war.

From the siege of Troy and the jungles of Vietnam to the deserts of Iraq and Afghanistan, war stories have always been told—some highlighting the glory, some the blood and guts. What’s remarkable about playwright
R. C. Sherriff’s strikingly authentic World War I drama Journey’s End, which just opened a month-long run at the Ross Valley Players’ Old Barn Theatre, is how modern, fresh and funny the play is. Beautifully written with equal measures of crisp insight and dark comedy, and sharply and sensitively staged by director Jim Dunn, one might never guess this thing has been around for 86 years.

Sherriff, a British writer and novelist who eventually turned to screenwriting (The Four Feathers, Goodbye Mr. Chips), based his claustrophobic stage masterpiece on his own experience of trench warfare in France toward the end of the first World War. Though the weapons and technical methods of warfare have changed since Sherriff’s days, it’s easy to believe that the alternately conflicted, committed, bored, terrified and traumatized soldiers of Journey’s End have much in common with troops serving overseas today.

Just 50 yards from the front line, where British infantrymen are literally dug in for a years-long standoff against the German army, a group of English officers wait—and wait and wait—for the next dreaded battle. They fill their time with hilariously mundane conversation (comparing rugby to cricket, commenting on the importance of pepper), rounding out the long days and nights with mindnumbing amounts of alcohol and the occasional high-stakes tabletop earwig race.

The genius of the play is how tense all of this waiting becomes. Whenever something happens, Osborne admits, it happens fast. Then everyone goes back to waiting. And although the final moments of the play do feel a tad rushed after so much buildup, the overall effect of Journey’s End is powerfully, elegantly devastating.