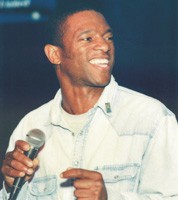 Walking in the Sun

Those whose lives have regrettably contained few made-for-TV movies starring Robby Benson may be unaware that the boyish actor starred in a small-screen ’70s flick that detailed the backstory of Bobbie Gentry’s modest 1967 hit, “Ode to Billie Joe.” In the song, a boy kills himself by jumping off the Tallahatchie Bridge; Gentry mildly relates the story of his suicide. In the movie, the Benson character is tormented so deeply by homosexual shame that the bridge becomes his only savior and final destination. And in the hands of soul singer Earl Thomas, who generally performs Gentry’s song with just a guitar accompaniment, it is among the most painful five minutes of misbegotten loss to ever transfix an audience.

Thomas, a former Guerneville resident who now splits his time among Humboldt County, San Diego and Denmark, takes the song using his voice as the main instrument and his phrasing as the heartbreak. “It’s both conscious and kind of unconscious,” he says by crackling cell phone from San Diego. “I’ve always admired singers like Nina Simone, Tina Turner, Etta James–the way they turn a note, sing every note each in her own fashion, don’t copy. I try to emulate the phrasing that I hear women do. Someone like Dinah Washington–that’s the kind of an artist whose style of phrasing I really admire.”

After a decade of ups and downs, Thomas is on a mission to finally make his career his own. Appearing this year both days of the Russian River Blues Festival on the Wine Garden stage (as he did last year), the man is on a roll. Following a slot at the Chicago Blues Festival this weekend, Thomas takes off at the end of June for the Montreux Jazz Festival at the invitation of none other than B. B. King.

His newest disc, Intersection (Memphis International), is a strong calling card, and he nearly tore the roof off the house at a recent Healdsburg performance. “As a performer, when everything comes together, when the band works and the crowd gets it and there’s an exchange of energy and everything is just really happening,” Thomas enthuses, “you just live for those moments. It was an amazing event.”

Intersection contains a number of unusual cover choices for a performer whose main forte is soul, including the T-Rex bouncer “Bang a Gong” and the Rolling Stones’ “Brown Sugar,” a tune Thomas often performs live so nakedly that it’s nearly a cappella. The choices stemmed from the CD’s recording session, when he discovered that the studio singers and musicians gathered–all strangers to him–were also almost exactly his same age. “We all graduated from high school around the same time,” Thomas chuckles, “and so we began to compare notes.”

Preferring songs whose stories are meaningful to him, Thomas reinterprets “Brown Sugar” from the African-American experience, imaging the woman of the song as a mulatto whose ancestry includes the slave master’s genes. “I don’t sing songs where I can’t understand some part of it,” he says. “It’s like the dialogue from a play; you want to know the character’s history to make the character real.”

While his song choices may occasionally look back, Thomas himself is fully geared up to look forward. “In the next five years, I expect to reach my goals,” he says. When asked what those are, he replies readily, “To become a good man. When my mom passed away, I decided that in her honor I would become the man that I know that she would always have wanted me to be, and that wasn’t easy, because I had some vices.” He laughs briefly, “Which I have removed. All of them.

“As an artist, I want to be able to access my vocal talents without hesitation, like an Al Jarreau or a Mel Tormé, people who could actually use their voices in any way, shape or form, and not worry about it. I really want to be recognized for my ability as an artist on an international level, but that’s not more important than being a good person or being a very in-tune artist.

“There’s a song by Rufus with Chaka Khan,” he muses as the conversation comes to a close, “‘Walking in the Sun.’

“I,” he stresses, “am that blind man walking in the sun.”