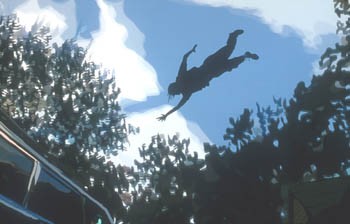 Pie in the Sky: Big ideas get a beautiful setting in ‘Waking Life.’

Waking Life offers an unforgettable tip on how to tell the difference between dreaming and wakefulness. Supposedly a dreamer has a hard time visualizing numbers on a digital clock, fine print, or shades of lighting. If you think you’re dreaming, try flicking a light switch; if the room doesn’t dim, you’re in a dream–and now it’s time to take charge of it.

This latest film from Richard Linklater (Slacker, Before Sunrise) is a tour through a sleeper’s dream state. Waking Life features an unidentified traveler (voiced by Wiley Wiggins) who drifts through a chain of conversations with other figures. Sometimes he tries to awaken and finds himself in another dream. He never quite emerges into the real world.

The film is rotoscoped by Bob Sabiston, director of those unsettling burnt-orange Earthlink television commercials, with the eyes and mouths floating in little lazy circles. The animation gives a tendency to make backgrounds wobble and shift.

While the coloring is lovely, the way the facial features drift here may make those who remember that short Canadian cartoon “The Big Snit” think: “Stop shaking your eyes!” Watching Waking Life, I had the twin sensations of being fascinated and seasick.

The images drift, but Linklater’s little mosaic of ideas forms a scheme. If we could control the action in our dreams, we’d have a little taste of being God. But in our waking life–the true subject of this film–how much are we in control?

Linklater’s dialogues form a treatise on the freedom to act. Robert C. Solomon, an existentialist prof from the director’s beloved Austin, gently counters the old argument that the godless can’t really have happiness in their lives. But the dreamer also encounters postmodern philosophers, who speculate that we’re all just functions of social programming. “I’d rather be a gear in a big deterministic physical machine than just some random swerving [sic],” says one grad-student type.

And the director follows the idea of free will to a negative extreme: if we’re all free to do as we please, why not just go on a murder spree? Linklater stages that argument via the ravings of a jailed psycho, voiced by Charles Gunning. On a less threatening level, we drift by a few intellectual thugs, striding purposefully to nowhere.

Waking Life has a length problem common to all unplotted films; after the first hour restlessness sets in. And where are all the women? There are a handful of memorable female characters here, particularly a dialogue by Julie Delpy and Ethan Hawke (continuing some of their discussions from the film Before Sunrise–and in a bed at last). Still, it’s mostly men who have their say.

One warning about Waking Life: Egghead haters, beware! Still, these dialogues on the unchained mind are music to the ears right now, when almost all the public discourse is one big howl for conformity. “Things have been tough for dreamers,” says one of the characters here.

Jonathan Schell, the informed pessimist who wrote The Fate of the Earth, wrote that the most horrific aspect of Sept. 11 was watching people rain from the sky. I love Waking Life for its beginning and ending, a beautiful anecdote to that horror: a man aloft, gently pulled into the sky, a symbol of limitless possibilities and freedom.