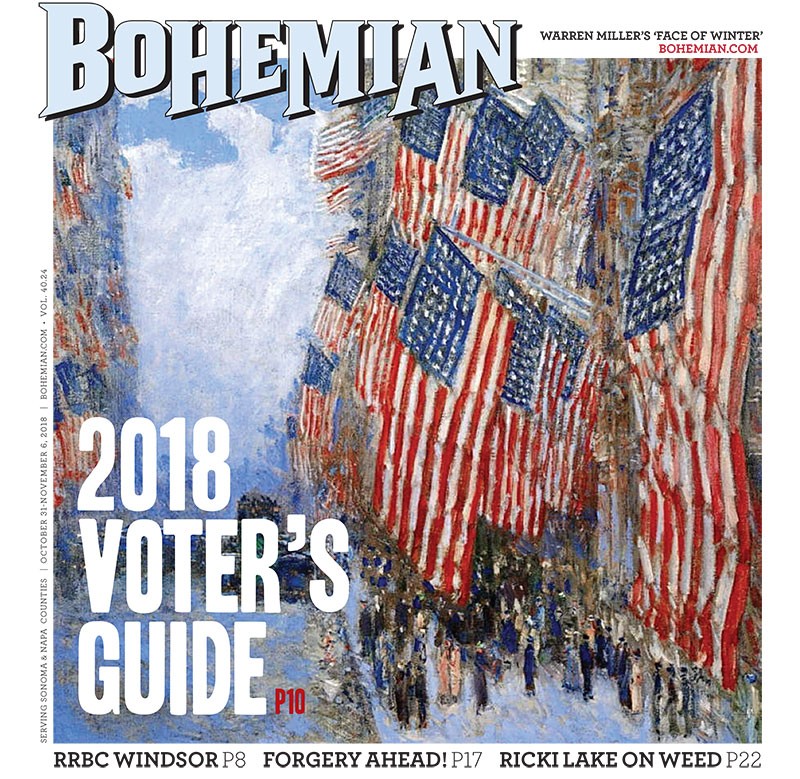 Well, duh. Did anyone think we were going to endorse the Republican John Cox for governor? Cox’s campaign in its entirety seems to be predicated on coaxing road rage from voters over last year’s SB 1, and this year’s Proposition 6, which seeks to repeal it (see below for more).

There are, of course, concerns with Newsom. They begin, perhaps petulantly observed on our part, with Newsom’s failure to provide a candidate’s statement to the California state voter’s guide. Whatever his campaign’s reason for withholding a statement, not participating in this most basic of civic activities—helping voters make an informed decision—smacks of a candidate so far ahead in the polls that why bother even indicating there’s a race at all, competitive or otherwise? Yes, Nate Silver gives Cox a 1 percent chance of defeating Newsom this year, but 1 percent is not zero percent, and we all know how the 1 percent’s been faring under Trump. After 2016, we’re not taking anything for granted, and neither should Newsom.

The no-participation posture smacks of the very sense of my-turn entitlement that the Lt. Governor’s detractors tag him with. That’s a posture that may not serve Newsom well in Sacramento. At least Jerry Brown knew how to throw the impudent yahoos of the California right a bone or two on occasion, if not the frackers.

As other wags have observed, Kevin de Leon did not acquit himself in a particularly senatorial manner when he teed-off on longstanding incumbent Sen. Dianne Feinstein during the Brett Kavanaugh hearing, over Feinstein’s admittedly weird handling of Christine Blasey-Ford’s letter of complaint against the frat-boy judge. Feinstein gets a lot of knocks for her national security hawkishness—she voted in favor of the disastrous 2003 invasion of Iraq—and for being insufficiently confrontational when it comes to the issue of the lunatic in the White House. At last blush, Feinstein’s up by some 10 points in the polls, which indicates that the state’s not as ready to bail out on the senator as its more progressive quadrants would have one believe.

But the bottom line is that Feinstein’s been in office way too long, is compromised by her establishment cred and her family millions, and it’s time for a change. Whether de Leon can deliver is a subject for another day, but we’re willing to take the chance.

Levine’s opponents have described themselves as the more progressive version of the popular San Rafael state assemblyman, as they often note his support from various big business and corporate interests in Sacramento. Still, we’re going with Levine this time around. This choice reminds us of the old days around election day when alternative weeklies were faced with endorsing a mainstream Democratic candidate for president—and instead lurched forth with self-serving editorial jeremiads about how awesome it would be if Ralph Nader were president.

As much as we like Levine challenger Dan Monte and appreciate his persistence and keep-him-honest critique of Levine, the incumbent has proved to be an accessible and decent fellow—and we were impressed with his efforts on behalf of undocumented children during Trump’s zero-tolerance moment of maximum misanthropy earlier this year, and with his bill targeting sexual-harassing lobbyists signed by Gov. Brown at the end of the legislative session. If nothing else, that’s exactly the kind of legislation that can begin to redeem middle-aged white men from their current national status as a rather fraught, if not downright icky, demographic.

Even if the Bohemian were pre-inclined to support the Democrat Alex Padilla in his race for Secretary of State this year, his opponent, Mark P. Meuser, is worth a shout-out if for no other reason than—wow!

Meuser’s entire candidate statement in the state voter’s guide is devoted to one thing and one thing only: scrubbing the voter rolls in California so that there are no dead people, undocumented immigrants or duplicate registrations. “If the rolls remain bloated,” writes Mueser, an attorney with a San Rafael campaign address, “special interests are able to use money and influence to elect bought and paid-for politicians.” Cynical translation: Unless we start throwing as many Democrats off the voter rolls as possible, California Republicans may never emerge from an obscurity of their own extremist, anti-immigrant making.

Meuser’s manifesto smacks of the same sort of flagrant voter suppression efforts undertaken by other secretaries of state around the country who are Republican—i.e., Kansas vote suppressor and Trump patsy Kris Kobach—and who have gleefully championed the worst of the worst when it comes to Trump and his autocratic-incompetent bent.

The reality-show president has made a lot of noise about how, were it not for all those illegal voters, he would have taken California in 2016, and he’s pledged to win the popular vote next time around, after losing it by more than 3 million votes to Hillary Clinton—and that was even after the Russian hookers whizzed onto the scene with advice on how to properly rig an election.

We’re opposed to any attempt, however gussied in civic duty, to deny people the right to vote under the guise of potential election “fraud” that’s been demonstrated to be a “total and complete lie” by any reasonable person or researcher who’s done the legwork.

C’mon, Republicans, give it a rest already. Proposition 6 aims to revoke 2017’s SB 1, which slapped a new gas tax on gallons purchased and with an eye toward dedicating the annual revenue to fixing the decrepit transportation infrastructure in the state. It’s a totally necessary and reasonable tax on a fossil fuel that ought to be shown the door in any event. But more to the point: back in the old days, elected officials of any party would wear it as badge of honor if their constituents referred to them as, say, Sen. Pothole—it indicated a down-and-dirty embrace of constituents’ most pressing, street-level concerns. Nowadays, any mention of a tax is met with road-raging Republicans hell-bent on driving this nation into the ditch—if only until they rescue it by throwing all the immigrants out of the country.

Proposition 12’s kind of a weird one, in that its detractors and supporters, or some of them anyway, are folks you’d expect to be on the same page when it comes to animal-cruelty issues and farming. People for the Ethical Treatment of Animals is opposed to Proposition 12, but we spoke to a member of the animal-rights group DxE recently who supports it. So here’s the deal: Current state law under 2008’s animal-welfare oriented Proposition 2 says that chickens, pigs and cows have to be given enough space to turn around fully. There’s no cage-free mandate in California even though Proposition 2 set out to make the state cage-free by 2015. Proposition 12 repeals the earlier measure, revises living-space requirements for hens, cows and pigs—and sets 2022 as the year when all the beasts will be freed from their cages at long last. Supporters in the animal-rights world highlight that enforcement of animal-cruelty laws would be enhanced via a new mandate directed at the California Department of Food and Agriculture (see “Cage Match,” Oct. 24, for more on Proposition 12).

We were impressed with all three candidates for Santa Rosa’s newly created District 4 seat, but in the end we believe Mary Watts to be the strongest candidate in the field, given her command of the issues facing many Santa Rosans. Watts, currently a deputy director at the Community Action Partnership, is facing off against the thoughtfully holistic social worker Victoria Fleming and Dorothy Beattie, who comes out of the banking and finance sector. As a renter in the city, Watts is young, smart and tuned in to crucial issues around economic equity, homelessness and mental-health services in the city. She gets our vote.

Lee Pierce is an impressive candidate in this two-person race for the 2nd District, and he has previously served on the city douncil. During a recent candidates’ forum at City Hall, Pierce told attendees that he’d gotten into the race in some measure because nobody else had stepped up to face the incumbent Sawyer. That’s not an especially great reason to vote for someone, but maybe next time around a young person of color will take a run at Sawyer’s seat. Until then, we got no big beef with Sawyer.

Santa Rosa had a $37 million reserve in fiscal 2016–17. The reserve has been plundered and is down to a much-dwindled $6 million as of this year. Measure O slaps a temporary, six-year sales tax on residents to fund post-fire rebuilding and other critical city needs, as it would raise an estimated $9 million annually to restore damaged facilities and infrastructure and help prevent future fires, repair potholes, streets and sidewalks, and improve the conditions of local roads. Sounds like a reasonable tax in a season of uncertainty.

Well, this is a tough one. Measure N seeks to raise $124 million through issuing bonds in order to build affordable housing and provide other housing-related boosts to Santa Rosa. We’re in support, but hope that if it passes, the city takes steps to ensure that organized labor isn’t left in the cold when it comes to who is actually going to build all that housing.

Stung by the surprise defeat of Measure C earlier this year, water-conscious progressives in Napa County have banded together and are running for positions across the county. Measure C set out to provide additional measures of water security in a region where, some say, the “Peak Wine” moment has come and left the county vulnerable when it comes to long-term availability of water for residents. Measure C lost by a hair, and activists vowed to turn on the heat at the voting booth this year. These candidates have also vowed to not take any corporate campaign donations this campaign season, and that’s very Beto of them. They’ve got our nod.

Geoff Ellsworth sits on the board of the City Council of St. Helena and is running for mayor this year. He’s been a big proponent of transparency, and campaign materials note that he’s been hard charging to improve water quality and lower water rates for resident via charges on big wineries and hospitality venues so that they’re paying, he says, “a fair price for the city water they use.” Sounds fair to us.

Jason Kishineff hopes to join the American Canyon City Council and plans, if elected, to introduce “participatory budgeting” to the city so “the people can decide how to spend their tax dollars.” Now there’s a radical thought we can get behind. He’s also pushing a health-focused agenda this fall, promising to introduce initiatives in support of farmers markets, a pesticide ban and skate parks.

Amy Martenson sits on the Napa Valley College Board of Trustees and was an out-front proponent of Measure C. Her campaign materials promise a robust push-back “against proposals that would privatize publicly owned lands and turn over profits to developers and winery owners.” She notes as well that the current makeup of the board of trustees skews to members with ties to the wine industry.

Xulio Soriano is running for a seat on the Napa Valley Board of Trustees and lays claim to being “one of the first indigenous candidates to run in Napa County in recent times.” He’s hoping to close the achievement gap in underrepresented groups and was also an out-front supporter of Measure C.

Donald Williams‘ campaign is pretty cut-and-dry: He’s running for a seat on the Calistoga City Council and pledges to stand for responsible city planning “that respects the town’s small-town character.” Call us convinced.

Next ArticleNov. 4: Uncharted Territory in Sebastopol