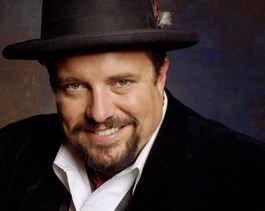 As with the Decca record company talent scout who declined to sign the Beatles and the marketing wizards who thought substituting New Coke was a good idea, we will probably never know the true identity of the vocal coach who told Raul Malo he couldn’t sing. But Malo, whose smooth, expressive delivery has since sold millions of CDs with the Mavericks, Los Super Seven and his own solo recordings, still remembers her.

“I was in a band before the Mavericks and we all went to voice lessons, and the teacher told me I wasn’t very good,” he recounts. “Luckily, I didn’t let that stop me or scar me in any way, but I remember that. She said I was doing it all wrong, and I’m, like, you know, I don’t know that there’s any right way or wrong way to do this. So I just kept at it.” He appears July 25 at the Mystic Theatre.

As their principal singer and songwriter, Malo led the Mavericks through a series of releases that moved from a strong foundation in classic country music (think Hank Williams, Patsy Cline and Johnny Cash) to incorporating a far wider array of influences, including pop hooks and lively Latin rhythms. Along the way, the Mavericks twice won the Country Music Association’s Top Vocal Group award.

As the new millennium dawned, Raul moved into solo work, releasing Today in 2001. With the bold brass and spicy dance beats of “Takes Two to Tango” and the title track, and sultry ballads like “Every Little Thing About You”—not to mention four songs sung entirely in Spanish—Today put Malo’s Cuban heritage front and center.

But Malo says neither that heritage nor the decidedly retro, hard-swinging small combo sound he featured on last year’s After Hours was any kind of career calculation. “I know that people probably think it’s deliberate and thought-out, and it’s really not,” he insists. “Growing up in a place like Miami, you not only had all the Caribbean and tropical influence, but my dad was a huge country music fan, and Mom is a big band and opera fan. So I had all this stuff always swirling around, and to me, the only criterion I had for music was whether I liked it or not.”

That helps explain why his last three discs, including a Christmas album last winter, were all collections of well-chosen songs from established writers as disparate as Buck Owens, Willie Nelson and the Bee Gees. But Malo is happy now to have recently wrapped up work on a new set of his own songs.

“It’s quite different,” he says of the still-untitled album, which is due out early next year. “The last couple of records have all been covers, so I stockpiled a nice little collection of originals. I had a lot to work with this time.”

Being off the road and home for the extended recording sessions also allowed Malo to explore a new creative outlet, an occasional topical blog on his website. “I can get on there and talk about anything, [but] sometimes I’ve got to watch it. I’ve learned not to blog when I’ve had a couple of beers, or when I’m angry,” he chuckles. “You’ve got to be careful.”

He is also careful, but firm, as he deflects any suggestion that he might work with the Mavericks again. “I’m not going to be a part of anything the Mavericks do anytime soon. That’s a part of my life that I no longer care to explore or to be a part of. We had a great run, we made what I thought were really good records, and we had a good time doing it, and I like leaving it at that.

“I thought we were real close to wearing out our welcome,” he adds.

Instead, he is now happily leading a versatile quintet that includes a two-man horn section. “The band I have now is real apt at playing different kinds of styles, which I love,” he enthuses. “They can cover it all, including all the Cuban stuff I did on the Today record and the Super Seven records. I’m really excited to get out there and play with them.”

As he prepares for the summer tour, Malo is eagerly facing a series of dates with no new record to push. “I’m covering all the bases now,” he says. “They’ll hear a little bit of everything.”