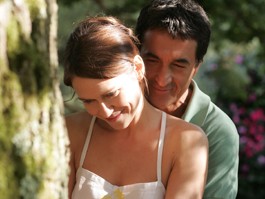 S lightly overstuffed but still comfortable, Tell No One simmers away very nicely. After a Bastille Day dinner party in the country, the childhood-sweethearts-turned-married-couple Margot (Marie-Josée Croze) and pediatrician Alexandre Beck (Francois Cluzet, the Roy Scheider&–type) go for a nude midnight swim. There is an unseen scuffle, and the doctor is knocked cold with a baseball bat.

Eight years later, the case seems solved. Margot’s corpse was found and cremated; the crime was the eighth killing by a local serial killer, which makes the carefree spirit of the midnight swim a little questionable. As always, Alexandre observes the anniversary of his wife’s killing, but there are new developments: two long-dead local thugs have been disinterred from a makeshift grave in the country. In one’s pocket, the police find a key to a storage locker full of evidence. And then over the Internet, Alexandre receives live footage of his apparently living wife: “Tell no one. They’re watching.”

From the deft way director and co-writer Guillaume Canet, working from a novel by Harlan Coben, plays the class card, a seeming crime of passion is more likely the evil machinations of the equestrian class (Jean Rochefort turns up as a French senator, to help us guess). Similarly, the only one able to untangle this web of deceit will be a badly dressed middle-aged cop with thinning hair. Francois Berléand plays this particular role with great aplomb.

My favorite moment comes when one of the dumb police underlings triumphantly finds a pistol planted in the fugitive doctor’s apartment. The rookie sniffs the barrel for the odor of burnt gunpowder, claiming, “It still smells.” You can read the reply on the inspector’s face: “So does this setup.”

Speaking of faces, Kristin Scott Thomas enlivens Tell No One as the lesbian lover of the doctor’s sister. As she ages, Scott Thomas has developed almost prehensile lips, recalling the multilayered frown of Vincent Price. The gay part is a nice way to red-herring-up the plot. Viewers get caught in a double bind: no one in this day and age is going to pin a crime on people who have suffered such terrible social ostracism, or is that just what we’re supposed to think?

Possibly, Canet intends to be another Luc Besson, a talent who can Frenchify the international style. It might work; he has good, novel ideas here, including a torture scene conducted by an insane female Rolfer, and a steadicam race through the Porte de Clignancourt flea market.

Still, I’m not completely in love with the film. Canet uses an underworld character from the slums who gets to be like the usual African American who sticks his neck out a mile for our white hero. And the film goes horribly Maxfield Parrish&–y in its last scene at a lake lit by computer-toasted radiance. This last appeal to the Yankee audience is a little thicker than we deserve, even considering the kind of mulch we ship to theaters overseas.