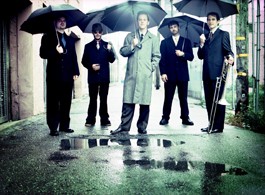 The not-so-quiet storm of the Shotgun Wedding Quintet

Adam Theis is always in the middle of a never-ending work schedule. The last time I called him up, he was headed out the door of his Mission district apartment to collaborate with Mos Def, working out hip-hop horn arrangements for a joint performance together at the Golden Gate Park band shell. On this day, he’s writing charts for “Beats, Bows & Brass,” his hour-long hip-hop-electro-modern-symphonic-jazz-suite, commissioned by SFJAZZ, to be performed in 2009 by a 60-piece ensemble and guest MC Lyrics Born at the Palace of Fine Arts. The night before, he led a marathon jazz tribute in North Beach to the original breaks sampled by De La Soul, Tribe Called Quest and the Jungle Brothers until the wee small hours.

Does the dude ever sleep? “Oh yeah, I get eight hours every night,” Theis laughs over the phone, having just woken up—at noon. “People are like, ‘Hey, can you rehearse at 10 in the morning?’ And I’m like, ‘No!'”

Even when new challenges crowd Theis’ schedule, he hangs on to his myriad projects. Case in point: the Shotgun Wedding Quintet, who for nearly 10 years have perfected their trademark blend of jazz and hip-hop fronted by charismatic MC Dublin. Atop a funky blend of saxophones, turntables, keyboard, flute, bass, trombone, drums and sometimes even electric violin, the crowd-rocking Dublin freestyles off-the-cuff stories in a vocalese style, doing with rapping what King Pleasure and Babs Gonzales did with jazz singing.

“He’s just one-of-a-kind,” Theis testifies. “He appeals to a lot of people who are the kind of people that I want to have come in to see music—the people who aren’t expecting a certain, exact thing. The people who are kind of fed up with the normal styles and sounds. He allows us to go in whatever direction we want. He’s totally versatile with whatever we throw at him. There’s never been anything he couldn’t do.”

With DJ Nick “Aspect” McCarthy, Mitch Marcus, John Monahan, Evan Francis and a drummer with ever-rotating names (“Pat? Gerald? Corky? He changes it every week,” Theis sighs), the Shotgun Wedding Quintet is sure to make the last weekend of 2008 one to remember, ugly Christmas sweaters and all. Count on nonstop breakbeats and a crowded dance floor when they headline the Third Annual Ugly Christmas Sweater Party on Friday, Dec. 26, at the Hopmonk Tavern, 230 Petaluma Ave., Sebastopol. 9:30pm. $10. 707.829.7300.