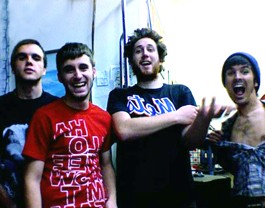 Pet Sounds, four guys mostly not old enough to drink, display every hallmark of a young 21st-century band. Their first show, from four years ago, is available in six separate installments on YouTube; they self-record their music and release it on CD-R; and their singer, Cory Oleson, has been known to take the stage in nothing but tight-ass booty shorts.

But hinted at in the band’s name—taken from the 40-year-old Beach Boys album—is a subscription to the idea that a band should believe in its music as an original force in the world, and not merely a condensed representation of its modern iPod playlists. Their grasp of this kind of urgency harks back to bands like the Get Up Kids or Desaparecidos, bands that were elevated, then subsequently decried, with one single word: “emo.” Pet Sounds may well reclaim the word as a compliment again.

“I want to make songs that, when we’re singing ’em, people are like, ‘They’ve seen some shit,'” says 20-year-old singer-guitarist Dominic Agius. On their EP Everyone Is Wrong, whether howling about drugs and forgiveness in “Five Lines” or seizing fleeting moments in “Situations,” shit is definitely on display; even in an acoustic setting, the band is intense. They’re danceable without falling back on hi-hat disco beats, and epic without relying on delay pedals.

“Old Tequila Skeleton March” sounds like just that: after four bars of a wordless a cappella vocal, a super-low fuzzed-out bass takes sharp stabs at the comfort. “Our inhibitions are our only disease / And I need you like you need me,” sings Oleson, while extended drum rolls fill random space. Later, a drunk carnival guitar solo brings it all reeling back hazily, and it might not be a coincidence that the song clocks in at exactly 4:20.

Pet Sounds are heading back out on the road in January with fellow locals A Pack of Wolves, and they’ll soon start recording a full-length album. A recent lineup change with Steve Ziesche and Tony Serronato has reinvigorated the band, and Oleson and Agius continue to push each other with their writing. “When he does something that’s really cool, and I admire, and I’m proud to be in a band with him,” says Agius of Oleson, “it motivates me to write something on par with it.”