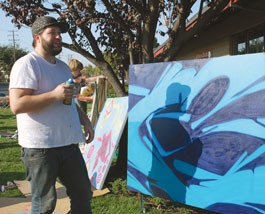 In most arts communities, museum and gallery art is at the forefront, underground and street art is underground, and ne’er the twain shall meet.

And then there’s Napa.

Home to world-class collections at the Hess Collection and the di Rosa Preserve, the Napa Valley is also bursting with emerging artists and new forms of expression, and the area’s small size and isolated geography make the climate perfect for a rare and welcome cross-pollination with the mainstream. Such a boon is no more evident than in this year’s Napa Valley ARTS 2010, a varied compendium of 117 events in just one month, running Oct. 15&–Nov. 14.

Arts Council Napa Valley executive director Kristina Young, who’s organizing the series, says the cross-pollination of art in Napa is a recent but forceful phenomenon, owing mostly to the arts council’s partnership with the organization Wandering Rose. While the council works with more established venues and organizations, Wandering Rose is an umbrella for DIY and indie art, which brings “a new, fresh outlook and perspective on the creative process,” Young says.

To that end, Napa Valley ARTS 2010 includes a launch party for the student-produced e-zine Panagea Highway; a podcast, La Vida Napa, about the Latino experience in the valley; and “Psycho Circus,” a Halloween party at the Rutherford Grange, recently rejuvenated under the direction of Susan Hirschy. There’s even the return of the Spray Can Slam, an aerosol art festival hosted by Napa Valley Art Supplies.

“My mission is to give legitimacy to this form of art,” store owner Jeff Holmes, 50, says of the Spray Can Slam. “When you see some really good aerosol art, you just go, ‘That’s from a can?’ It shocks people.”

With over 350 people gathered on the store’s front lawn, the Spray Can Slam has in the past stopped traffic, attracted gawkers from the Wine Train and lured in people who may have previously thought of graffiti as vandalism instead of a creative outlet. “Older painters who come into the store, they might say, ‘Well, isn’t this just tagging? It’s not really legitimate art,'” Holmes says. “And I say, ‘You know, watercolor was once not legitimate. It was a sketch. Michelangelo, the old masters, they did a watercolor just to get composition and color balance before they painted, and now watercolor is a legitimate art. This is the same.”

Holmes started the Spray Can Slam showcasing what he calls “the art of this generation” as a biannual event after carrying Montana spray paint, a high-end artists’ label more expensive than, say, Krylon or Rust-O-Leum. Because of its higher price, he says, most people buying from him create canvas pieces or commissioned murals instead of tagging on freeway overpasses. Says Holmes, “The more the community can see them and say, ‘He’s a nice guy, he’s not a gang member,’ the better.”

As one who displays graffiti art prominently on the walls of his store yet also sells supplies to established artists, Holmes has a unique vantage point on the Napa art scene and its current trajectory. “There’s a huge awareness and big momentum,” he says. “Some people just don’t get art. It’s not their cup of tea. And that’s OK. But I think Napa is really on a huge wave right now that’s been rolling for several years, and right now it’s on the verge of explosion.”