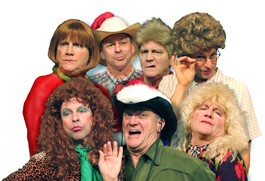 Something Fishy: Michael C. Storm and Stephen Klum play some 20 roles in PASCO’s ‘A Tuna Christmas.’

In local theater, the holidays are a lot like those “Secret Santa” gift swaps where you show up with a gift you hope will be appreciated by a stranger whose name you pulled from a hat, while sitting in perversely amused and/or nervous anticipation of the moment when you are handed your own gift-wrapped mystery, chosen (or found in the garage) by whoever it was had the good and/or bad luck to draw your name.

Much like in the game of Secret Santa, when it comes to holiday theater, good intentions only go so far; too much fake sentiment can be deadly, and you never know when you’ll be unwrapping a dud or a Yuletide treasure. With so many Nutcrackers and Christmas Carols to choose from between Thanksgiving and X-Day, it’s good to have some pointers in your pocket when you’re in search of some Christmas entertainment. Here, then, are the basic facts—with a bit of critical commentary—on some of the local sugar plums being served up this season.

For six consecutive years, the Sonoma County Repertory Theater has been staging a nifty, stripped-down version of Dickens’ Christmas Carol, with an adaptation by Preston Lane and Jonathan Moscone. The production has become a tradition for some people, who knew they could count on a good time from Eric Thompson, a religious studies teacher who’s made a bit of a career out of playing nasty, old ghost-haunted Ebenezer Scrooge. This year, there have been a few major changes in London Town, with Thompson sitting this one out due to scheduling conflicts. (Give the man a break! He’s done this six years in a row.)

Director Gene Abravaya, who is known for establishing a comfortable, creative working environment for his actors, makes his Rep debut, and Scrooge will this year be embodied by the Rep’s producing and artistic director Scott Philips, a tasty fit that should create some nicely irascible fireworks when let loose onstage among all those ghosts and plum puddings. The show runs Nov. 23–Dec. 23. Tickets run $18–$23, with pay-what-you-can nights on Thursdays. Call 707.823.0177 or go to www.the-rep.com for more information.

Another Christmas Carol rises from the fog this year, as director Carl Hamilton, known for his dark, minimal stagings of classic works, takes his own crack at Dickens. Expect it to be existential, edgy and to have John Vinson (who directed the Raven Player’s One Flew Over the Cuckoo’s Nest, finishing its run Nov. 24) as Scrooge. The show happens at the Raven Performing Arts Theatre in Healdsburg, Dec. 13–22. Tickets run $10–$18. Call 707.836.0104 or go to www.ravenplayers.org for information.

There is but a hint of the old miser Scrooge in it, but the freshest—and potentially the most hilarious—Christmas Show on the boards this year appears to be Pacific Alliance Stage Company’s two-actor romp A Tuna Christmas, written by Jaston Williams, Joe Sears and Ed Howard. Directed by Hector Correa, the play takes audiences through one wild Christmas in the town of Tuna, the third smallest town in Texas.

Two actors play all of the town’s inhabitants, including the vaguely Neanderthal local radio hosts Thurston Wheelis and Arles Struvie describing Tuna’s outlandish Christmas lawn decorations; Joe Bob Lipsey, the “not the marrying kind” director of the town’s struggling production of A Christmas Carol; the eyebrowless Elmer Watkins; and the snobbish Vera Carp, leader of the religiously right Smut Snatchers of the New Order; and about 20 more. The plot, such as it is, involves the mystery of who has been stealing baby Jesus figurines from the front lawns of local citizens. Could start a trend. The show runs Nov. 23–Dec. 9. $15–$20. Call 707.588.3400 or go to www.spreckelsonline.com.

Aimed squarely at the family audience, Petaluma’s Cinnabar Theater presents a very hip “young actors” musical production of the classic It’s a Wonderful Life. The script by Marcy Telles, with music by Janis Dunson Wilson, does not talk down to the younger audience and contains all the manic-depression and hints of group alcoholism suggested by the original material—making the whole thing somehow even cooler. It runs Nov. 30–Dec. 16. Tickets are $10–$15. Call 707.763.8920 or go to www.cinnabartheater.org to learn more.

Also aimed at families, Santa Rosa’s Sixth Street Playhouse presents an adaptation of C. S. Lewis’ wintry The Lion, the Witch and the Wardrobe, the first official holiday show from Sixth Street’s new School of Drama. Directed by Bronwen Shears and Jenifer Cote, the show is a fully staged production and features a cast made up of kids ages eight to 13. And if kids dressed up as animals isn’t a Christmas tradition, then neither is playing Secret Santa—or stealing baby Jesuses from your neighbor’s lawn. It runs Dec. 7–22. Tickets are $10. Call 707.523.4184 or go to www.6thstreetplayhouse.com for information.