Property manager says that rope was used as a swing 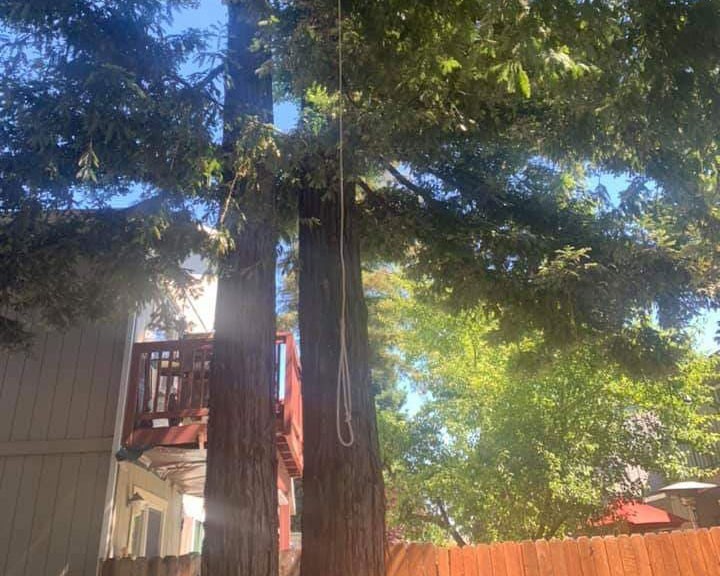 [7:00pm update: Commander Aaron Johnson, a spokesperson from the Rohnert Park Public Safety Office, says the department has contacted the manager of the property where the rope was found. The property manager told the police that the rope was on the property for months for children to use as a swing, according to Johnson.]

Rohnert Park police officers are investigating a possible noose after an image of a rope hanging from a redwood tree prompted anger and outrage from Sonoma County residents on social media.

The rope, which was about six feet long, hung from a branch about 12 feet above the ground, a Rohnert Park resident and a police spokesman both confirmed on Thursday afternoon. The bottom of the rope hung about six feet from the ground, both said.

In an interview, the Rohnert Park resident who found the rope hanging in a tree on Civic Center Drive on Thursday morning said they hoped the incident would be “fully investigated” by law enforcement.

“My intention was that it would be investigated and not cut down and swept under the rug,” the Rohnert Park resident said.

While they acknowledged that the knot in the rope was not tied like a “traditional noose,” it also did not look like a child’s toy.

A police officer removed the lower half of the rope on Thursday afternoon and a spokesperson from the Rohnert Park Public Safety Office, Commander Aaron Johnson, confirmed that the agency is investigating the matter.

The rope sighting comes after a weekend in which hundreds of residents attended protests in Rohnert Park and other North Bay cities as part of the nationwide Black Lives Matter movement.

Johnson, the spokesperson, told the Bohemian that officers will return to the area this evening in hopes of finding residents who might know something about the story behind rope. Officers knocked on doors early this afternoon, but few residents were at home.

The report of the possible noose—a longtime symbol of racist killings—angered many residents online as news reports of nooses and Black men found hanging dead in trees were published over the past week.

On Wednesday, Oakland Mayor Libby Schaaf announced that the Oakland Police Department and FBI are investigating a series of five nooses hung in different locations near Lake Merritt as a possible hate crime. On Thursday, Oakland residents reported an effigy hanging in a tree.

In Southern California, law enforcement agencies are being criticized for not properly investigating the deaths of a series of Black men found hanging in trees.

Next ArticleSix Ways to Celebrate Juneteenth in the North Bay