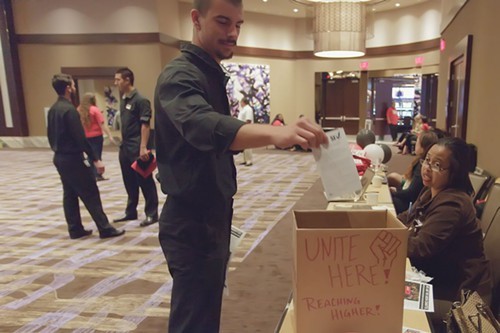 Nothing was official yet, but the vote was “going great” Wednesday afternoon at Graton Casino, where Unite Here’s Sara Norr was counting union sign-up cards from workers here that would set in motion a collective bargaining agreement for 650 casino employees.

Norr said the results would be out by week’s end.

If enough waiters and janitors, hospitality workers and cooks vote in favor of unionization, they’d enter collective bargaining talks with casino operator and their employer, Station Casinos. The casino opened in 2013 and is owned by Federated Indians of Graton Rancheria.

Norr said that tribal input in any talks would be a matter of negotiations between the Las Vegas-based casino operator and the owners.

“It is between Station and the tribe how they want to divide up input or responsibility, so the tribe could send a rep to bargaining if they wanted to and Station agreed,” Norr says via email.

Workers signed the cards Tuesday and Wednesday in a casino events room rented to Unite Here’s 2850.

“As a single parent, job security is number one,” says porter and signee Christina Vega, who lives with three of her children in Santa Rosa.