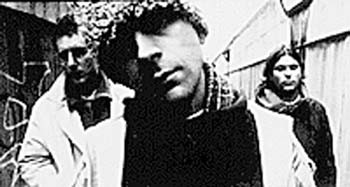 KARL HYDE, the 40-ish poet laureate of the U.K. dance-cum-rock outfit Underworld wants to talk. Which is good, considering his band’s new album, Beaucoup Fish, has been co-opted by the U.S. dance music press as a next-big-thing. The hype has landed the incongruous trio of Hyde (lyricist and onetime Blondie guitarist), programmer Rick Smith, and DJ Darren Emerson on magazine covers usually reserved for more obvious pop stars.

Not that the attention is unwarranted. After all, as electronic acts go, the Undies were on their way to stardom when their 1996 Born Slippy (Nuxx) crossed over from the dance floor to become the Trainspotting soundtrack’s bona fide hit.

And at least for the next few months–until the Chemical Brothers’ issue their new record and likely reclaim the title–Underworld are uncomfortable stand-ins for the “electronic-rock stars for the new millennium.”

So you can’t really blame them for just wanting the dance floor instead. Beaucoup Fish‘s 11 tracks careen from vocoder-voiced breezy house to icy 4/4 trance; from pulsing, opaque pop that recalls mid-’80s Wire to drum-free ambiance around dark narratives. Given Hyde’s rich vocals, his rhythmic delivery and by-whatever-beat’s-necessary grooves, Beaucoup Fish has much in common with such long-forgotten U.K. cult acts as David Sylvian’s Rain Tree Crow and the Fall. Even the record’s straight-up dance beats are more anonymous club fare than crossover fodder. Though public radio fans can find a lot of moody melody and vocals–a rarity in DJ music–there’s not a Born Slippy (Nuxx) in this bunch.

To which Hyde offers a resounding “Thank God for that!” Though fighting the flu, Hyde, on the phone from the London, perks up now.

“Repeating ourselves would be life as a cartoon, like us becoming an idea of ourselves,” he says bluntly.

“We went through that in the ’80s,” he explains, referring to Underworld’s first pop incarnation, which at one point found Hyde and company playing arenas as opening act for the Eurythmics.

“Back then, we had very little money. Then somebody comes along and offers us money, and says, ‘If you just change this and that . . . ‘ Pretty soon, you’ve become an extension of a marketing idea.” That was the mistake in the first two incarnations of the band. “The third time, we said, ‘Let’s just make music because we want to.'”

As he was attracted to the late ’80s U.K. acid house scene, Hyde met up with knob twiddler Rick Smith and DJ Darren Emerson. While acts like New Order and Happy Mondays made rock music you could dance to, the post-Eurythmics version of Underworld took it the other way.

“From square one, when we were performing in the DJ box at [respected U.K. techno club] Ministry of Sound, our goal was to build on what the DJ had created, like ‘Can we play so that no one notices it’s a band and not a DJ?'”

But success brought what Hyde calls “the industry thing”: “People were saying, ‘You could be the band that takes dance to stadiums.’ And we were horrified. There was no idea to get in line to become the next Dire Straits, for God’s sake.

“It came down to people saying, ‘You could be God if you made that record–Born Slippy (Nuxx)–again.’ And with this record, we said, ‘No, really, we’re really just human beings.'”

Hyde addressed his mortality privately when he overcame a drinking problem last year, and has since settled into East London life as a new parent. Publicly, however, all Beaucoup Fish really reveals is him and his musical accomplices returning to the spies-in-the-house-of-dance fascination that fueled their early singles. They want their music judged by what it is, “not what it’s hyped to be.”

“We’ve always said no when we’d get offered some ‘British Invasion of Electronica’ bollocks,” he adds. “Besides all that hype kind of stuff is so ’80s.”