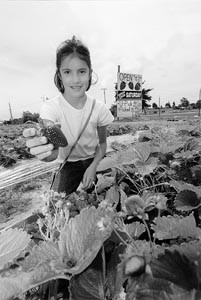 The joys of plucking your own fruit

THE FIRST SIGN of summer is upon us: U-pick signs along the back roads. Soon, flocks of cheerful families will descend on the local strawberry fields, picking a couple of pints, maybe half a flat among four people, just enough for a shortcake after dinner and a lesson for the kids about where strawberries come from.

Like swallows to Capistrano, they are drawn to these sloppy, hastily built signs.

No signs were necessary in the U-pick fields that I knew best, the farming patches of semi-suburban Oregon. The same people–mostly thrifty housewives–went back year after year, for their annual score of really cheap jam ingredients. My mother would place the baby carriers in the shade at the end of the row, leaving the rest of us children to roam through the field, as free as grubby little fairies. Somewhere in the middle of those busy, back-breaking days, my mother took a picture of a 2-year-old me, cradled in the leaves of a strawberry bush, mouth stained red and grinning. That may have been the day that the field boss suggested weighing me as well as the buckets.

Soon enough we graduated to wanting to help and learned to tell good berries from bad: the ones that looked red but were green under the stem; dull ones on the verge, which could be eaten on the spot but would disintegrate between the field and home. The ones that squished on contact were fun, but useless. We wanted the ripe ones, firm but fragrant, that hid from inexperienced eyes under matted dead leaves, later to emerge as red sticky splotches under our overeager knees. We learned to check both sides of the bush thoroughly, to straddle rows like the adults, our stubby legs awkwardly splayed. We walked around rows, instead of stepping over, and didn’t fill the buckets too deep (to avoid pressing the berries at the bottom into pulp). We filled the back of our VW bus with buckets and held some in our laps.

Most of the berries went straight into the freezer, where they became solid blocks of red ice that could be hacked apart only with a butter knife. We made fruit leather, too, lumpy reddish-brown sheets that peeled off the dehydrator racks in plastic-wrapped rolls. (This was about when fruit roll-ups were invented on a commercial scale, and we kids secretly coveted their uniform smoothness.) But the best fruit was eaten straight out of the containers during the drive home, the fruit of our labors. And it was labor. U-pick in that place and time was closer to gleaning, not a tourist attraction or a family outing with neatly groomed rows and plenty of red berries for all, but a dirty labor of necessity in a field that had been stripped clean by hired hands who knew their business.

EVENTUALLY we kids would know that business, too. During this time of little money and lax child-labor laws, if we wanted good school clothes, we had to make our own money. So when the berries turned red and we had reached the age of 12–the real age of accountability, when one is able to keep track of a lunch bag and put at least every other berry in a bucket and not your mouth or your sibling’s hair–we headed to the fields for the commercial harvest.

In the last shout of a rural society, the schools let us out early for the summer if the berries ripened faster than expected. We got up at 5 a.m., caught the berry bus at 5:30, and stumbled sleepily into the pale, cool fields. There we learned in graphic terms what went into a dollar, in a formula that we grasped instantly: two flats to an hour, $1-$2.25 per flat, 12 quarts to the flat. Of course, that was at the beginning of the day, when the dew on the leaves soaked our dirty jeans and trailed across our forearms, keeping us awake. We all worked fast then, when the sun had barely come up and the air was cool and green-smelling. We ate only a few berries, surreptitiously, to keep us going after a too-early breakfast.

By noon it was too warm to move. The clusters of dirty preteens stood up from the siesta of lunch and stretched, blinking in the midday sun. At the same moment we all remembered that we were kids, that we wanted to be at the pool or in the cool dark of the video arcade. Then we were good only for strawberry fights and the last lazy fruits to round out a flat. Boom boxes got louder. The incidence of outhouse fireworks increased. The field bosses got more vigilant then, checking each flat for signs of cheating: dirt or hard green berries peeking out from under a thin layer of ripe ones. At the end of the day, around 1 or 1:30, we turned our grimy punch cards over to the paymaster and got our earnings in cash, then boarded the jostling bus home.

For a couple of horrible summers, I was picking and U-picking the same fields, looking at the same ruts and shrubbery with weary eyes. So by the time I was 15, I was ready to leave berries behind for a job in a fast-food restaurant. I didn’t have to get up so early, and the boys were cuter, or at least not as dirty. But the strawberries in the sauce we dribbled on sundaes were sad, limp shadows of the berries I remembered from U-pick.

In fact, no berries since have ever matched the first berries I learned to pick–warm, a little dusty, juicy enough to slake a child’s endless thirst.