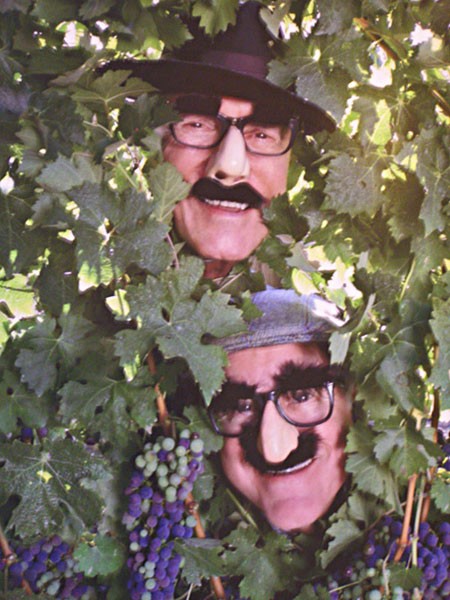 If the man behind the bar looks vaguely familiar, it isn’t because you saw him here. It’s Squire Fridell’s first day on the job at the tasting room, which opened in November in an alleyway across from Sonoma Plaza; up till now, he was busy winding down the crush at his Glen Ellen winery. Neither would you recognize him from the promotional videos for Two Amigos, in which Fridell and friend of 50 years Bob Briner appear in a series of goofy skits disguised in plastic noses and Groucho glasses. It’s because you’ve seen the upbeat television actor smiling from the screen on thousands of other occasions; he may have even sold you on a Happy Meal.

Although Fridell did serve a stint from 1984 to 1991 as the official Ronald McDonald clown in TV commercials, it’s Suzy McDermaid Fridell’s heritage that inspires plaid-themed GlenLyon Vineyards, which the couple founded after settling in Glen Ellen in the 1980s. The limited estate-grown Syrah sold out fast, so Fridell teamed up with his former college roommate to create an accessible but small, fun brand. “I underwrote all our beer drinking in college, and he still owes me!” Briner quips.

There’s something about the Sonoma Valley that makes winemakers want to clown around, wearing barrels, and the Amigos comport themselves proudly in that tradition. They don’t farm out much of their labor—Fridell is the cellar master, and friends and family are recruited for harvest operations—and they make sure to keep it personal with wine club members. “We don’t do e-commerce,” says Briner. “You call up Guido”—his Amigos code name—”I say, ‘What do you want?’ And then, ‘OK,’ and let’s go!”

The Italian-themed 2009 Vito’s Vino Bianco ($20) is actually 100 percent Roussanne, with all the honeyed nose and oily, rich pear flavor of that French varietal. Aiming for a facsimile of Chianti Classico—an elusive goal for California winemakers—the Amigos sourced Sangiovese from Santa Barbara County for the 2009 Guido’s Vino Rosso ($26); with bright vanilla and red cherry aromas, and an efficient finish of rubbery tannin, this fun table wine hits the spot.

GlenLyon “Squire’s Toast” 2010 Cabernet-Syrah blend ($46) is a little youthful, but should win over big-wine fans with chicory, allspice and burnt toast, plum jam and a big dollop of tongue-drying tannin and black fruit. “Squire’s Toast” is capped with a red-and-yellow striped capsule, while the label depicts Fridell as a clown in big red shoes who looks . . . only vaguely familiar.