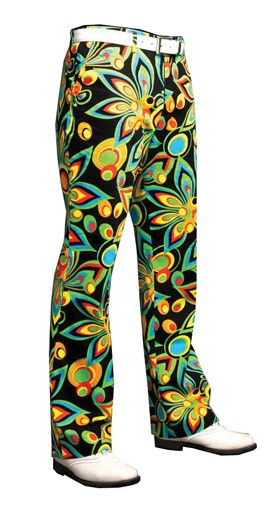 It’s not every day that the average guy gets to walk up to pro golfer John Daly and strike up a conversation, and it’s certainly not likely to happen at the Masters golf tournament in Augusta, Ga. Across the street from the Masters entrance, however, is a different story, where for the past few years, Daly—who hasn’t qualified for the prestigious tournament recently—has instead opportunistically set up a makeshift merch stand at his RV in a parking lot of a jewelry store on Washington Avenue.

What does he sell, here in the mecca of golf? Ugly golf pants, of course.

“They been real good to me,” Daly says, swerving his arm in mock-swing over to the table covered in high-octane clothes made by Loudmouth Inc. in Sonoma, “and they sure do grab attention.” The pants patterns are dizzying, with colors reminiscent of Trix cereal mixed with wardrobe cast-offs from Laugh-In. Other golf fans nearby pick up the high-volume wares and actually laugh. Who in the world would wear this stuff?

Well, Daly, for one. The working-class hero of the golf world smokes Marlboros, is sponsored by Hooters and 84 Lumber and has been caught with a flask in his golf bag more times than Tiger Woods has been caught in bed. Guys who dig Daly tend to go for the classic golf stuff, before titanium and treadmills took over and before smoking and drinking and beating the hell out of the ball while wearing grotesque manifestations of day-glo run amok on one’s legs went out of date.

“I just started designing stuff with what I found in old fabric warehouses in Santa Rosa,” says Loudmouth founder and classic golf fan Scott Woodworth from his Sonoma home, “and I used to ship the pants out right here, in my office, where me and my kid would print shipping labels at night. We’d send out eight or 10 boxes every couple days.”

An impromptu TV segment from the US Open a few years ago led to wider interest, and earlier this year, the Norwegian curling team took advantage of the sport’s no-dress-code rule and sported argyle Loudmouth pants on a world stage at the Winter Olympics. The pants were a tremendous hit, The Today Show featured them, fans took to their social networks, and now, the “The Norwegian Olympic Curling Team’s Pants” Facebook page has 612,318 fans. All because of the little company in Sonoma started by nostalgia for the gaudy fairway flair of the 1970s.

Loudmouth pants run $95, with shorts at $75 and socks at $10. Although Loudmouth is sold online and at hundreds of locations around the world—including John Daly’s RV during Masters week in Augusta—strangely, no golf course or shop in the North Bay is brave enough to carry the Loudmouth line. Don’t delay, however; the company’s sold out of its entire stock every spring for the last three years.

Apr. 8: Corinne West and Kelly Joe Phelps at the Lark...