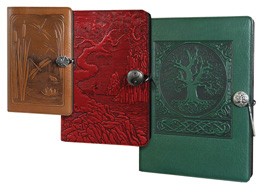 In Shakespeare’s Midsummer Night’s Dream, Oberon is the king of the fairies, ruler of a band of mischievous supernatural beings who create havoc, for good and ill, in the lives of human beings. Although in the 1960s, productions of the play featured the otherworldly prankster in flowing ribbons and feathers, in many modern productions of the play the fairies wear leather. There’s just something about leather that brings out the magic in people.

Which brings us to Oberon Designs.

In the North Bay, Oberon is the king of leather and pewter crafts, its name now associated with a line of handmade craft items created right here in the North Bay. Starting in the late 1960s, artist Brendan Smith began developing his skills as a leather crafter, picking up the trade while working at a local saddle shop. Eventually, having opened a small shop in Napa, Smith began selling handmade sandals. He then expanded his line to include belts, handbags and moccasins, ultimately reaching thousands with his own craft booth at the Renaissance Pleasure Faire.

Drawn to the detailed craftsmanship and elegant designs, a fan base began to grow. Smith’s work, often emblazoned with images from the worlds of fantasy and mythology, was seen not just as something utilitarian (a shoe, a belt) but as a piece of art in and of itself.

Over two decades later, Oberon Designs can be found all over the world, and are a mainstay in local bookstores and gift shops. Located in Santa Rosa, the company has recently started designing cell-phone sleeves and e-reader covers, bridging handmade craft with new technology. Smith still serves as lead designer, personally crafting the designs for most of the new leather pieces and all of the pewter items. Employing a talented troupe of craftspeople, including Smith’s sister Becca, Oberon has remained small—even though its impact, like Oberon king of the fairies, is immeasurable.