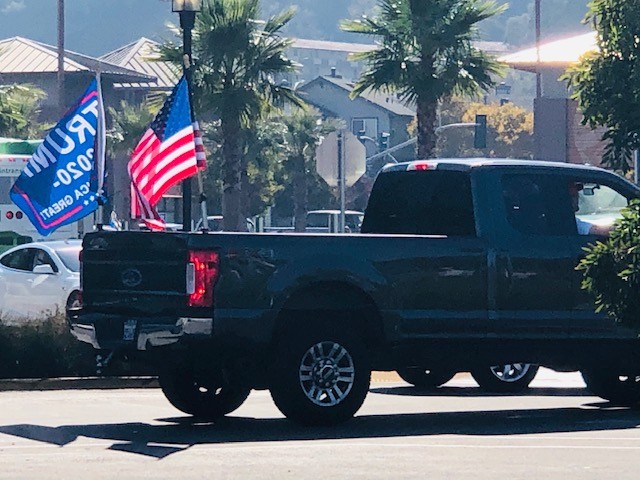 The motorcade, which started in Santa Rosa and made a stop at the Vintage Oaks Shopping Center in Novato, exited the freeway at about 11:15am and pulled into the Marin Gateway Shopping Center in Marin City as part of a series of Trump Train events across the country Sunday.

Up to 100 people from Marin City came outdoors to watch more than 1,000 Trump supporters take over the center’s parking lot, according to attendance estimates from the Marin County Sheriff’s Office. The cacophony was almost unbearable as the Trump demonstrators honked their horns, ranted through loudspeakers and screamed.

The Marin County Sheriff’s Office, Sausalito Police Department and California Highway Patrol were present in the parking area but took little action, except to direct traffic. A sheriff’s deputy on the ground said they were there to keep the peace.

Sergeant Brenton Schneider, a spokesperson for the Marin Sheriff’s Office, said the demonstration did not have or need a permit, because they were exercising their First Amendment rights; however, he did not know whether they were lawfully permitted to assemble on the shopping center’s private property.

“We did not give them [Trump supporters] permission to be on the property,” said Terri Henry, property manager of the Marin Gateway Shopping Center. “They just showed up.”

It was likely illegal to hold a political action within 100 feet of the official ballot box located in the shopping center, according to California state law.

“At vote by mail ballot drop boxes, loitering near or disseminating visible or audible electioneering information” is prohibited, Chapter 806 of Senate Bill No. 286 states.

“‘Electioneering’ means the visible display or audible dissemination of information that advocates for or against any candidate or measure on the ballot,” the law continues.

The caravan of vehicles blocked the area directly in front of the ballot box as the rally bled out the exits of the parking lot, bringing traffic to a virtual standstill. The Trump supporters took this opportunity to taunt Marin City residents lining the streets.

“A voter was trying to use that box and felt intimidated,” said Lynda Roberts, the Marin County Registrar of Voters. “I reported it to the Marin County Sheriff’s Department and the California Secretary of State as soon as I learned about it.”

“Why didn’t the Sheriff’s Department let the community know the rally was coming?” Damian Morgan, a Marin City resident and board member of the Marin City Community Services District, said in an interview Monday. “When Black people demonstrated recently in Tiburon and Sausalito, the police let their communities know.”

Schneider said the Sheriff’s Office didn’t know until 15 minutes before the MAGA supporters arrived in Marin City, when the Novato police informed them. Morgan disputes the timeline.

“Deputy Josie Sanguinetti told me they had a three-hour heads-up,” Morgan said. “That was plenty of time to email people they know in the community or to alert us on Nextdoor. They could have at least told us there’s going to be 300 cars in our community.”

Though they received no notice, most Marin City residents remained calm, even as the unwelcome rally goers stormed their neighborhood. Racial epithets and curse words were tossed from the Trump supporters. Schneider, the Sheriff’s spokesperson, said counterdemonstrators shot paintballs and threw eggs at the caravan cars.

The Sheriff’s Office received 911 calls about physical altercations; however, law enforcement didn’t observe any physical fights, and no victims have come forward, Schneider said. Marin City residents hope Election Day is calm and peaceful, though there is concern this type of unrest may be a precursor of things to come.

“You can never be too careful,” Morgan said. “I would like to think there’s not going to be any trouble, but we have to be prepared and have our eyes open. We just don’t know.”