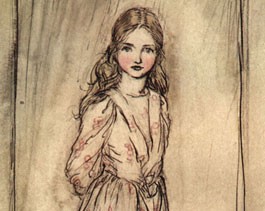 Poor Alice Liddell. Her life story is way more complicated than most because it has so many versions, all masquerading as the same one. Fiction slides easily into fact, making it tricky to decipher what really happened. That said, the real Alice Liddell met author and mathematician Charles Dodgson, aka Lewis Carroll, in 1856. Nine years later, the celebrated Alice’s Adventures in Wonderland was published. Far from the Disneyfied, flaxen-haired creature we know, the real Liddell (who wore her brown hair in a short bob) was one of 10 children.

But these blurs between fact and fiction don’t bother former Pulitzer Prize nominee Shann Nix, whose new play Alice Underground, a dark musical about the 82-year-old Alice approaching the end of her life, will premiere this week as part of the exciting new slate of programming at the Sonoma Community Center.

Nix, a former KGO radio host and reporter for the San Francisco Chronicle, has been drawn to legend and fantasy lately, perhaps because she’s currently residing in Wales. She corresponds via e-mail from a centuries-old, stone farmhouse in Wales (“Real King Arthur country!”) and also where the real Alice spent family holidays as a child. While Nix was researching for a children’s play she was writing for Marin’s Vector Theater Company, she discovered that the real Alice remained a celebrity in later life; at 80, Columbia University bestowed an honorary degree upon her, for . . . being Carroll’s muse?

“I got to thinking about what her life would be like–how strange to be so famous not for something that you yourself had accomplished, but for being someone’s inspiration! There was also a lot of historical material that I found quite provocative–rumors of an affair with Carroll, whispers that he wanted to marry her when she was only 14, missing pages from his diary, his fondness for taking nude photos of little girls,” Nix says.

Directed by the locally renowned Tom Segal with an original score composed by Jef Labes, the piano player for Van Morrison, the musical opens as Alice’s daughter-in-law takes her to a nursing home, despite Alice’s vehement protests. It’s not long before we get a weird sense of déjà vu; we discover that the move to the nursing home was precipitated by Alice’s hallucination of a walrus in the drawing room.

Heralded by the arrival of the white rabbit, the cast of Carroll’s characters come back to interact with the “real” Alice in a strange brand of historical-fiction-meets-fantasy that’s studded by familiar, but twisted, mad tea parties and unjust trials. Nurses morph in and out of sexy bunny getups; the Mad Hatter strides onstage as an orderly. “I love to weave well-known characters from fairy tales or children’s stories together with modern realities. I find the resonances intriguing,” says Nix.

Nix lets herself do what we’ve all wanted to do all along: She plays a masterful version of “let’s pretend.” Why shouldn’t the selves of Liddell and Alice overlap? It’s a play, after all, and fiction benefits from a healthy dose of reality, so why even bother with the “truth”? Alice Underground shines because it doesn’t try to quarantine fact from fantasy. Instead, it gathers the momentum of both dramas, forcing them to collide head-on in a fusion, where the sum is way madder than its parts.