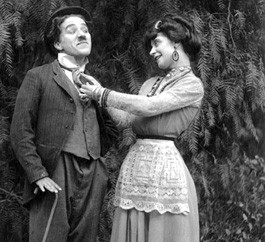 Over the last century, Charlie Chaplin’s early films made at Keystone Studios were often seen in grimy, jerky prints, so dim they made the plots impossible to understand. The new four-DVD set Chaplin at Keystone sweeps away those cobwebs from Chaplin’s yearlong work at Mack Sennett’s famed studio in a restoration both welcome and impressive.

On the Keystone assembly line, the custom was to make just 50 prints for the entire world market from a negative that was by no means kept pristine. It’s a testament to Chaplin’s rabid popularity that 34 of his 36 Keystone films are here and accounted for, and there’s even a recently discovered chunk of a 35th film.

When Chaplin came to America, slapstick pioneer Sennett recollected that he “could fall, trip, stumble, somersault and make faces. These were stock-in-trade items that we could use. I did not see then . . . the subtleties and pathos.” Likewise, Chaplin at Keystone shows only glimpses of the later Tramp, with his insistence (as essayist Robert Warshow put it) that a clown’s sorrows are the deepest sorrows.

And yet here is a silent comedian going against all grains of screen comedy of 1914. Chaplin is a man of extremes: wearing clothes too loose or too tight, with size-5 feet in size-14 shoes, wearing a mustache on a child’s face. And still, he cuts a dignified, finicky figure amid slum dwellers.

Kid Auto Races at Venice marks the screen debut of the Tramp character, and must be counted as one of the first mockumentaries. Released, says Sennett, on the same reel as a promotional film titled Olives and Their Oil, we see a soap-box derby interrupted by what seems to be a persistent amateur waddling like a penguin who can’t stop scowling into the camera.

Chaplin isn’t always a tramp; at times, he appears as a well-dressed scoundrel. He and Mabel Normand are a treat in Mabel’s Busy Day, where her attempt to sell hot dogs at a racetrack is defeated by mooches on all sides. Normand works the sympathies of the crowd while surreptitiously licking mustard off her hands, and Charlie plays a thief, seizing the wieners and passing them around for free.

At Keystone, Chaplin entered a world of violent slapstick and situational comedy. He left after starring in the first full-length comedy feature, Tillie’s Punctured Romance, in which a duded-up Chaplin and his girlfriend (Normand) bamboozle a wealthy heifer (Marie Dressler). The film is as knockabout as anything else on the set, with the comedic power of extended narrative visible and the limitations of the two-reel slapstick film transcended.

Even before he left Keystone, Chaplin had changed the focus to a star holding the stage, slowly building a routine. If a cowboy goes off alone at the end of the movie, he learned it from Chaplin. The “delirious egotism” found in Chaplin is present in Gene Kelly and Fred Astaire. It’s found in Garbo’s close-up and in the pregnant silences of every method actor. Chaplin took what was considered hired-hand work in a novelty factory and changed it irrevocably, and Chaplin at Keystone documents that change beautifully.