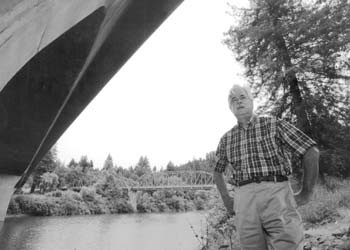 Rollin’ on the river: Don Test, executive director of the Russian River Region Visitors Bureau, says his organization is taking a 27 percent budget cut and gambling that the countywide tourism campaign will succeed.

Local tourism industry retools for the future. Is everybody happy?

A PROPOSED PLAN to limit funding to popular tourism destinations, such as the Russian River and Sonoma Valley, and instead funnel money into promoting the entire county as a tourist hot spot, is causing worries among local tourism groups who fear a loss of money, jobs, and regional representation.

Chris Finlay, director of the Sonoma Valley Visitors Bureau, says that creating and advertising a county image could be detrimental to local offices. “We do have some concerns [about the proposal],” she says. “Regional representation is important in promoting tourism in the county. When people make their travel plans, they don’t say ‘Sonoma County’ is their destination, they have specific destinations within the county. We think in terms of Sonoma County because we live here.”

Don Test, executive director of the Russian River Region Visitors Bureau, agrees. He says that for the radical plan to be successful, areas must preserve their regional characteristics and continue to promote them. “Visitors come to the area for various experiences, such as business, wineries, recreation, hiking, or the beach,” he explains. “We have that diversity in Sonoma County and we want to retain that.”

Even so, the Russian River Region board supports the final study of the plan “in concept,” Test says, adding that the board has offered to accept a 27 percent downsizing in next year’s budget. “Sonoma County is taking an extremely big step in recognizing tourism as a major industry,” he says.

But he adds that it’s too soon to tell whether the Russian River Region Visitors Bureau, established in 1953, will continue as the same entity with the same office space and staff.

The proposed five-year Sonoma County Tourism Strategic Plan, prepared by Lance and Associates of Lafayette and Strategic Marketing Group of South Lake Tahoe, aims to “guide the future tourism efforts in Sonoma County” and squelch years of conflict between competing tourist destinations. Experts say tourism is an $800 million-a-year industry, contributing to one in every four jobs

Last year, because of infighting among several local promotional agencies, county supervisors withheld $770,000 in transient occupancy funds raised from hotel taxes and earmarked for those organizations. The new plan hinges on the creation of a new umbrella tourism agency for the entire county.

“The objective is to make the county competitive,” says county consultant Jack Lance of Lance and Associates, which took four months to come up with the new strategy, currently under review by Sonoma County supervisors.

“The first draft [of the plan] met with tremendous opposition,” recalls Finlay. “But after a lot of feedback from the community, the plan has been modified to satisfy many of those concerns.” She says regional promoters are “cautiously optimistic” about the revised plan. “But there are still many details to be worked out,” she warns. “We’re not sure how big a role we will play, or what the funding levels will be. At least we’re sure there will be a role [for regional offices]–in the initial plan there wasn’t.”

The first draft suggested that all regional bureaus be de-funded and become nonexistent. “They’ve come to realize that getting rid of the regional bureau would be throwing the baby out with the bath water,” says Jenny Carroll, president of the Russian River Region Visitors Bureau. Carroll and others from that bureau have sent a letter to the Board of Supervisors stating that the initial option of de-funding the four major visitor promotion organizations was “unwise, imprudent, and, actually, unnecessary.”

However, Sonoma County Supervisor Mike Reilly sees the plan as a fresh start for a competitive industry. “There’s a new level of cooperation in Sonoma County we haven’t seen before,” he says. “Countywide tourism efforts will be a unified approach to create a county image.”

Linda Johnson, executive director of the Sonoma County Wineries Association, agrees. “We need to do something countywide,” she says. “We’ve jumped ahead with promoting regions rather than making a countywide statement.”

Ben Stone, executive director for Sonoma County’s Economic Develop-ment Board, which will initially help oversee the new group, says the goal is to take Sonoma County into larger markets. “A coordinated effort will bring everyone forward–it will be a rising tide that lifts everybody,” he says, adding that regional diversity will be preserved and enhanced.

Regional tourism offices will maintain their funding for the next six months; then, says Stone, the focus will be to enhance the retail section in local offices and reduce local public relations and advertising in favor of a collaborative effort under a countywide umbrella organization.

“We see no major reduction in jobs,” he says. “But we do see a reallocation of resources that will bring more yield into the county.”

Santa Rosa this month agreed to give $91,000 annual funding, originally earmarked for the Sonoma County Convention and Visitors Bureau, to the nine-member Sonoma County Tourism Advisory Council that will be created by the Board of Supervisors under the new tourism plan.

Funding for the 14-year-old Sonoma County Convention and Visitors Bureau funding will be maintained for six months and then reduced, Stone says. Eventually the new group will take over the bureau.

Meanwhile, some regional representatives say their reaction to the proposed overhaul “fluctuates daily” as more details are hammered out. “Change is always difficult,” muses Carroll. “I don’t care how good it may be.”