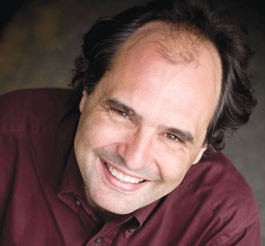 At 20, the Bioneers conference celebrates art, knowledge and community

As a journalist in the 1970s and ’80s, Kenny Ausubel saw the coming environmental crisis. He decided to do something about it, becoming part of the solution by starting Seeds of Change, a New Mexico company promoting agricultural diversity by saving and selling rare and heirloom seeds.

Soon he was connected with what he called “all these amazing Bioneers” (a contraction of “bio” and “pioneers”), and a friend said, “Why don’t you have a conference?”

“I’d never been to a conference,” Ausubel said in a phone interview earlier this month. The idea “didn’t grab” him, but Ausubel’s friend said, “Here’s $10,000—have a conference.”

At that first conference in 1990, Ausubel realized that “within just a few hours of getting all these remarkable people together, it was like a revival meeting. I thought they’d all know each other, but I discovered that few did, even within the same fields.”

That was 20 years ago. Today the conference, to be held this weekend at the Marin Center, has grown to more than a hundred speakers and almost 3,000 attendees. But don’t think for a second that it’s the kind of conference where the audience just sits and listens. Its goal is participation and engagement, Ausubel says, and there are sessions designed to encourage attendees to “reimagine” their lives.

After two decades of wild growth, the Bioneers has become an alternate version of the TED conference. It brings together an all-star roster of leading lights in fields ranging from permaculture to biomimicry (emulating natural systems to solve environmental problems) to green chemistry. And it goes beyond science with topics such as socially responsible herbal medicine, eco-psychology, cultivating women’s leadership, faith and nature, and a seed exchange hosted by the Occidental Arts and Ecology Center.

“Once people realize there are viable solutions, that dramatically leverages the pressure for change,” Ausubel says. “What we didn’t realize [when the conference started two decades ago] was that connectivity was incredibly important.”

There are keynote sessions with such legends as Jane Goodall, who is marking the 50-year anniversary of her groundbreaking chimp study in Tanzania, and panels with authors such as Marin County resident Andres Edwards, author of the just-published Thriving Beyond Sustainability: Pathways to a Resilient Society.

Edwards, who will speak Sunday, says that the Bioneers Conference presents ideas and practical work that act as a map for environmental solutions. Panelists are very approachable, he says, and eager to bat around ideas with conference attendees. Beyond science, he says, “it’s a celebration of art, knowledge and community.”

In some ways the Bioneers are preaching to the choir, “but the choir gets rejuvenated,” Edwards says, “and that’s important. It’s an opportunity to get exposed to a lot of inspirational ideas. And the conference is focused on what’s working.”

Goodall, who started a program called Roots & Shoots to involve young people in environmental preservation, says the next decade will determine whether humans can live sustainably on Earth.

“I don’t know if we can last much longer unless there’s major change. But everywhere I feel it changing,” Goodall says. “You know, even if we don’t think seven generations ahead, which is a bit difficult to do, we [must] think about our own children and the future, instead of the next shareholder meeting or instead of how much money can I make.”

A three-day Bioneers pass costs up to $495 which could exclude some people, but Ausubel notes there are scholarships and says the conference is “cheap for what it is: 140 speakers and three days of events.” Compare that to $6,000 for the TED conference.

The old saying “Think Globally, Act Locally” applies to the Bioneers. Ausubel notes that the European Union and China are leading the way on renewable energy creation, and that economics may be what gets the U.S. to develop a national energy plan. He says that more renewable energy capacity was developed in the past year than fossil fuel capacity.

But he becomes most animated when discussing local initiatives such as Andy Lipkis’ work to bring together clashing Los Angeles bureaucracies and develop a coordinated water plan that’s conserving L.A.’s watershed while saving taxpayers money.

“The trend toward localization is picking up a great deal of steam. In the U.S., that’s where most of the progressive change is happening,” Ausubel says. “Local economies bring many more benefits and job creation, and money stays in the community.”

The Bioneers Conference runs Friday through Sunday, Oct. 15&–17, at the Marin Center, 10 Avenue of the Flags, San Rafael. Pre- and post-conference intensives are slated for Thursday and Monday. www.bioneers.org.