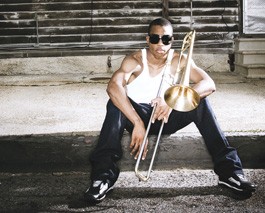 Twenty-four year old Troy Andrews, aka Trombone Shorty, is one of a rare breed of musicians who can artfully combine style and substance and still emerge as the crowd favorite at any festival at which he appears. This weekend, the Louisiana multi-insrumentalist headlines the Petaluma Music Festival, and minds are most assuredly to be blown.

Andrews is only 24 years old, but already he’s held his own against the greats (a YouTube cutting session called “Trombone Shorty vs. Wynton Marsalis” is eight minutes of unadulterated joy), appeared on Late Night with David Letterman, backed U2, recorded with Harry Connick Jr., toured with Lenny Kravitz and guest-starred on the HBO series Treme, named for his childhood neighborhood in New Orleans. That’s quite a résumé for a kid who in the early ’90s was walking along with brass bands in New Orleans parades, his five-year-old’s arms too short to even reach the end of the slide on his trombone.

What Andrews has assimilated along the way is a melting pot of genres; he’s versed in jazz, a master of Dixieland, knows his blues and feels the funk. Onstage Andrews most resembles a hip-hop star, working the crowd with body-language bravado, call-and-response chants and an incessant milking for adulation which hip-hop stars often don’t deserve. Andrews does. His latest album, Backatown, explores a more funk-rock direction, but New Orleans tradition burns hot beneath the surface. Whether on trombone or trumpet, whether singing or playing, Andrews is a master of his craft. Catch Trombone Shorty and Orleans Avenue headlining the Petaluma Music Festival, with ALO, Poor Man’s Whiskey, Steve Lucky, Sol Horizon and more on Saturday, Aug. 7, at the Sonoma-Marin Fairgrounds. 175 Fairgrounds Drive, Petaluma. 11am&–8pm. $25&–$30. www.petalumamusicfestival.org.