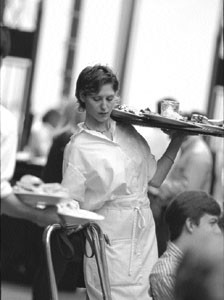 Is it service or custom that tips the scales?

I WAS AT a coffee counter one time,” relates Kris, a Penngrove computer programmer, who describes himself as a frequent diner-outer. “There was a little sign on the tipping jar that said, ‘It’s true! Your karma is improved when you tip!’ I want good karma as much as anyone, so I left a dollar.” This, for a single cup of coffee–to go.

“In restaurants in general,” he continues, “even in sit-down restaurants, I’ve never been clear how much is really an appropriate amount to leave. So I’ve begun to leave a higher tip, 20 percent or more, thinking, ‘If I shoot high, I don’t have to know what I’m doing.'”

What Kris’ tale indicates is that the etiquette of modern tipping, if there is one, has become so vague and indistinct on this service-hungry cusp of the 21st century that consumers are routinely confused about what is expected, and why. There are even voices mumbling that the whole tipping system amounts to little more than the publicly subsidized stinginess of employers, and should be abolished.

Since the late 1970s, the going rate has been 15 percent. Although that’s still the norm, it is steadily edging up toward 20 percent. An informal survey of West Coast eateries revealed a majority of servers quoting “15 to 20 percent” as the accepted norm, while only a handful left it at a simple 15. Internationally, the rules become even more disparate: in most of Europe tourists are expected to tip for many services, such as directions around town, that are considered freebies in America. In China, on the other hand, tipping your waiter or bellman is considered rude.

Consumers of yesteryear left no more than 10 percent on fountain counters. A decade ago, it was rare for tips to be brazenly solicited for counter service, but in today’s coffeehouses and juice joints, with their “tip jars,” it has become de rigueur.

THE HISTORY of tipping is as clouded in mystery as the rules that currently govern it. There is some evidence that tipping has its roots in the decadent Roman Empire. An oft-repeated story is that tipping–supposedly an acronym for “to insure promptitude”–became common in the “penny universities” (coffeehouses) of 16th-century England.

Another explanation is that “tips” of gold were thrown by horse-bound feudal lords to the unsavory peasants in the streets, as payment for safe passage. English etymology would support this theory in its suggestion that the word was originally medieval street talk for “hand it over.”

Tipping denigrators have predecessors in the Anti-Tipping Society of America, an alliance of 100,000 traveling salesmen who from 1905 to 1919 managed to have the custom abolished in seven states. Practitioners of tipping once honed the custom to a kind of high art, carrying separate billfolds and change purses expressly intended for service payment. Today the custom has degenerated to simple mathematical computations (e.g., twice the tax, rounded out), the result often left on the table in crumpled bills or artlessly added to the credit card bill.

“People are always putting emphasis on money,” explains Michele Maussion Wilson, an etiquette consultant who conducts popular table manners classes in Scottsdale, Ariz. “I think that in that run for the money we lose something that is gracious and elegant. Tipping is an act of kindness in a world that has become too fast and rude. It is an antidote to rudeness.” Put more directly, Wilson adds, “Waiters are not your dogs. You can treat them with respect.”

Wilson advocates never leaving less than 15 percent. She usually leaves more. “Tipping is part of your pleasure. It makes you feel good,” she says. “And you must never simply leave the money on the table and walk away. You don’t wave the money about. You discreetly leave it beneath the bill. Then you gain their eye contact, and you say, ‘Thank you for your kind attention this evening.’ It’s so easy to do and it means so much.”

Recent studies reveal that the amount of a tip often reflects factors other than the tipper’s generosity or the server’s ability. According to a Cornell University report, servers who introduce themselves by name receive an average tip 53 percent greater than the tip for those who do not; servers who squat next to the table while talking with customers–thereby improving eye contact–up their tips from 15 percent to 18 percent; those who write “Thank you” on the back of the check receive about an 18 percent tip, the same amount female servers get by drawing a happy face, whereas males who do so decrease their tips by 3 percent; the use of tip trays bearing credit card logos increases tips by up to 25 percent, even when customers pay cash; tips soar by 140 percent for servers who simply smile; and those who casually touch customers (e.g., once on the shoulder, twice on the palm of the hand when giving change) add to their tips by 42 percent, women customers being a bit more generous than men.

“IF YOU TIP less than 15 percent, it’s assumed that you felt the service was well below expectations,” says David Bynum, assistant director of Food Services at Santa Rosa’s Flamingo Hotel, who adds that he’s seen a slight shift upward from 15 percent. The currently acceptable rate for tipping a bellman, by the way, is a dollar per bag, and more if services beyond the norm are required, such as helping with a wheelchair or conveying a pet to the customer’s room. Bynum’s largest tip came when he offered to fix a guest’s television set. He received $100.

“The thing about tipping is, we may expect it, but it’s not obligatory,” he says. “It’s a gift you make to someone who deserves it.”

Pitra, a waitress at Aram’s Cafe in Petaluma, puts it another way.

“I love it when someone tips big, sure,” she says. “But I’d rather they left 15 percent and said, ‘Thank you, have a nice day,’ than to leave a big tip and act like I’m not human. Kindness is conveyed in more ways than just money.”