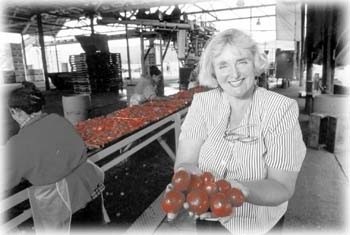 IT IS HARD not to get a small touristy thrill driving west on Healdsburg’s Dry Creek Road. Dipping and turning, the road to Lake Sonoma takes the car by quaint winery signs, acres and acres of vineyards, stoic restored Victorian homes, and Timber Crest Farms. Turn into Timber Crest’s driveway, lined as it is with the requisite grapelands, and drive up to the office.

Oh. From the many workers sitting down for their 10 a.m. break to the whirring of the processing machinery to the whoosh of the ovens to the hum of the huge cold storage sheds to the “Open” sign at the small retail store to the large office building itself–that’s where the realization hits that it’s Timber Crest Farms®, with a definite registered trademark.

Because while Timber Crest is most certainly in the business of family farming, this is nothing like what Pa Ingalls envisioned when he hitched up the Conestoga wagon to head out west. The emphasis here is on business. And what makes business so interesting is people.

Timber Crest co-owner Ruth Waltenspiel is one of those people who makes it so. A graceful blonde dynamo of a certain age, with young blue eyes and bright cherry lipstick, Waltenspiel emerges from her office in the back of the free-standing building that is comfortably filled with folks in jeans and clean tennies talking on the phones, taking meetings, feeding the fax, and doing the bulk mailing–a typical morning here at the family farm.

“Top of the day to you,” she says jovially, extending a well-manicured hand. Opening the main door of the office, she steps outside into the still-cool air to stand overlooking her vineyards. Across the road stand Timber Crest orchards, some of the last orchard land left in the county, most others having defaulted to the ever-growing demand for grapes.

Work in Progress: Tomato halves are aligned upright for drying.

Of the six crops that Ruth and her husband, Ronald, grow–apples, pears, peaches, prunes, and grapes among them–tomatoes are truly the love apple. Establishing their family farm on these 150 acres in 1957 (he overseeing the agriculture, she the business, they now own some 1,500 acres in the county, with additional acreage in Yolo and Solano counties), they raised instead, Waltenspiel cheerfully reports, “nothing but red ink.”

And then in 1980, Ruth took the family’s products to a fancy foods show in New York City. “About the best thing I can say about that venture,” she recounts, “was that they were underwhelmed. But in going to fancy markets, I saw that there were a lot of little bitty jars of dried tomatoes coming in from Italy, and they were selling at $12-$15 a jar. And I came back to California and I said, ‘Ladies and gentlemen, we can grow a tomato or two in this state–we can do this product.’ And it took off like crazy. We just couldn’t even keep up with it.”

Today, Timber Crest does $10 million a year in business, 10 percent of it from dried tomatoes sold under the “Sonoma” label. As Waltenspiel leads the visitor through the farm’s processing areas, the mostly Hispanic workers (all of whom are offered a paid-for, books-and-all college or trade school education by the Waltenspiels) go back to washing, turning, drying, and scraping the tomatoes that run through five washings along conveyor belts. “Sun-dried” itself is something of a misnomer, as the hardy tomatoes aren’t quite hardy enough for field-drying, receiving their shrinkage in outdoor ovens instead.

Waltenspiel raises her voice above the din of the equipment; dull-orange earplugs shine in a worker’s ears. “Basically, we’re just a sole proprietorship, we’re not a corporation or anything fancy like that. I don’t want this to sound corny, but you can only wear so many shoes and you can only wear so many clothes, and I don’t want a great big house to take care of because that’s a lot of work, so we’ve just plowed it all back into the business. Because we enjoy it,” she says, stopping. “I genuinely enjoy what we do.”

Still entrenched in the health-foods markets and in such specialty chains as Trader Joe’s and Williams-Sonoma, Timber Crest’s sun-dried tomatoes show up in everything from Oroweat’s specialty breads to Wolfgang Puck’s gourmet frozen pizzas. After 17 years of seeing her most popular product grow, Waltenspiel is philosophical.

To remain competitive, Waltenspiel plans a trip driving the southernmost coast of the country, stopping in to personally meet clients, dropping in on food editors and librarians to talk about tastes, and trying regional foods.

Smiling, she confesses that she’s looking forward to eating “in strange little places to see if I can find another dried tomato. Maybe I will, maybe I won’t,” Waltenspiel shrugs, knowing that her luck has already been good. “You never know.”