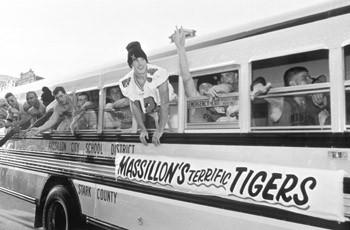 IN THIS TOWN, every baby boy gets a football put in his hospital crib at birth. In this town, the local funeral home offers a line of coffins adorned with the high school football team’s mascot–a grinning tiger cub. And in this town, voters decide the school district’s financial future on the basis of who wins the big game.

Welcome to Massillon, Ohio, where touchdowns trump textbooks–and just about everything else.

Folks who’ve never lived in towns like Massillon may find all this hard to believe, let alone understand. But truth is stranger than fiction, as is made clear by Go Tigers!, a documentary screening Oct. 6 at the Mill Valley Film Festival.

Directed by Kenneth A Carlson (formerly a producer on America’s Most Wanted), Go Tigers! offers a subversive exploration of this small town’s obsession with the performance of the Massillon Tigers. But this is also one of those rare documentaries that’s packed with enough drama, tension, and exciting visuals to engage even those utterly indifferent to its social message.

High school football has dominated life in Massillon for about a hundred years. Go Tigers! jumps into the story at the start of the Tigers’ recent 106th season. A new crop of players has just taken charge of the team, which suffered a losing season the year before. With a tax levy to rescue the school district’s ailing finances about to come before the fickle voters, these kids have one simple task: win every game.

“I think there’s a lot of pressure on our kids to win,” blithely explains the quarterback’s mom. “They know that’s their job. That’s your job. You do it.”

Football resembles ritualized combat in the film’s bone-crunching action scenes. Blood is shed. Heads are bashed. War is the dominant metaphor. “We’re gonna come out there and kick their fucking asses,” shrieks one player to his teammates. “I’m gonna kill somebody out there.”

Yet Go Tigers! is more compelling when it quietly explores the private lives of these young players. “Football saved my life,” explains defensive end Ellery Moore, who went from being jailed for rape to becoming one of the team’s biggest stars. Moore, who lives in a rundown house in Massillon’s black neighborhood, hopes to parley prowess on the field into a college career.

Interviews with other team members reveal that these teens have both a canny assessment of how important football could be to their future and a fairly clear idea of how absurd the town’s preoccupation with the sport is.

For if football is important to the players, it’s absolutely everything to many adults.

Go Tigers! offers no moralistic narrative voice to hammer home its message. But it’s hard to escape the point of a scene demonstrating that even religion can’t escape football’s grasp.

Before the team’s all-important contest with the McKinley Bulldogs, a priest visiting the Tigers’ locker room discusses the Jewish Passover tradition in which the family’s youngest child asks the father why this night is different from all other nights.

“Why is this day different from all other days?” the priest asks the players. “We say this is the day in which rivalry reaches its summit. This is the game of games.”