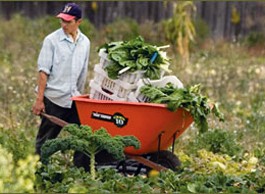 The melons are ripe, the strawberries are sweet, and the newly ground cornmeal is as natural and as organic as it gets. But the smoked onions are to die for. At least, that’s what TV’s charismatic chef Emeril Lagasse thought when he tasted them. “Emeril went crazy for our smoked onions,” Evie Truxaw said on a recent Friday afternoon at Tierra Vegetables’ roadside stand on Airport Boulevard in Santa Rosa. “After he tasted them, he invited us to be on his show.” Truxaw and her sister-in-law, Lee James, who own Tierra along with Lee’s brother and Evie’s husband, Wayne, were recently taped for nine hours at the farm and in Lee’s kitchen. The first week of November, the two women will appear on Lagasse’s show Emeril Green that airs on Discovery Channel’s eco-lifestyle network Planet Green.

They’re thrilled, to say the least. Wayne James won’t be on the show, but he’s not sulking. The New York Times ran a big, beautiful photo of him striding barefoot across his fields not long ago, and he’s already had his 15 minutes of fame.

“We were nervous, and we really worried,” Evie said while she worked. “We never had TV at Tierra before. We need not have been so worried. Everyone on the crew was really nice to us. They were normal. Emeril was normal, too. He’s a big supporter of local farms, and he was really impressed with Tierra.”

Sonoma County shoppers have long been impressed with Tierra’s diversity of fruits and vegetables. On an early October weekend, shoppers were lined up to buy eggplant, tomatillos, beets, carrots, broccoli, cauliflower, lettuce and five different kinds of autumn squashes: butternut, delicata, spaghetti, acorn and pumpkin. “It’s a great time of the year,” Evie said. “I call it ‘the Great Divide.’ We’re already in fall, of course, and fall vegetables are here in abundance, but summer vegetables are still coming in strong. Wayne and I have been living on winter quash, potatoes and chiles. I could eat them every night.”

Evie, Wayne and Lee aren’t getting rich at Tierra, but they love the farming lifestyle and they’re clearly stoked by the recent attention from Emeril Lagasse. They’re delighted, too, that Sonoma County is garnering national attention. Moreover, fame hasn’t gone to their heads. Wayne works as hard as ever. Lee continues to make her delicious strawberry-chipotle chile jam, as well as the smoked onions that brought her and Evie an invitation to Lagasse’s show. Evie still gives customers practical advice about cooking. When one shopper asked how to prepare acorn squash, she described all the steps: “Cut off the ends, slice the squash in half, take out the seeds, put olive oil on the outside and cook face down in a pan for 45 minutes at 300 degrees,” she said. Evie Truxaw just might be ready for prime time. You can see her on TV or in real life down on the farm five days a week.Tierra Vegetables Farm Stand, 651 Airport Blvd., Santa Rosa. Open Tuesday-Friday, 11am to 6pm; Saturday, 10am to 4pm. 707.837.8366. www.tierravegetables.com.