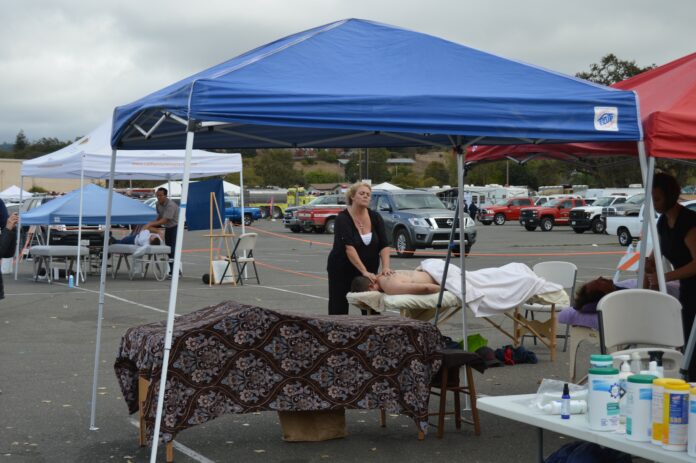 Just a little rain, to ease the pain...

On any other day, a dark and foreboding afternoon sky over Santa Rosa, with heavy, drooping clouds, might raise some concerns among residents—but nearly two weeks after fires broke out through the North Coast, rain has danced into the region, perhaps a bit lightly, and there’s a discernible sense that a fire wind-down is afoot.

Still, Santa Rosa residents Thursday were more likely to see out-of-town fire equipment rolling through city streets than the local SRFD—Burbank, Pasadena, Sacramento pumpers were just a few of those spotted around town. And as of Thursday morning, fire officials at Cal Fire had pushed out the date of expected full containment of the numerous fires from tomorrow to next Tuesday, Oct. 24. Friday was always a hopeful estimate, officials stressed earlier this week, but as the Buddhists like to say, “hope and fear won’t change the weather.”

Thursday morning, total containment stood at 80 percent across the Tubbs, Pocket and Nuns fires, with the Tubbs at 92 percent, Pocket at 73 percent and Nuns at 82 percent.

A paramedics crew from Truckee Meadows, Washoe County, Nevada, was eating lunch at El Patio downtown in the early afternoon—and in their own way, giving back to a community they’d driven hundreds of miles to protect and heal: The owners of El Patio, the colorful Mexican restaurant popular with the junior high kids from Santa Rosa Middle School, had lost a home in the Fountain Grove part of town. Through it all, the El Patio chicken fajitas tacos were as reliable as ever.

The Truckee Meadows crew said they were headed home later today or tomorrow and were awaiting word on whether their services would still be needed locally, as the wind picked up a bit and a few drops of rain started to fall. But just a few.

The command center set up at the Sonoma County Fairgrounds continued to be operational, as first-responders and National Guardsmen lined up for free tacos from a Dora’s truck set up in the parking lot. Burly tattooed men were getting massages, a common sight through the week, and a phenomenon whose origins may lay in the days after 9-11 when first responders were tested to the limits of their endurance, and public massages were a common sight.

There was a welcome sense of calm and accomplishment at the command center, as first-responders chatted over paper plates of chow and endless cups of coffee. The Fairgrounds still hosted a massive tent city for first responders, scores of fire trucks were parked as far as the eye could see, and it appeared as though the National Guard was preparing to reduce its presence in the city.

It’s kind of amazing to think that in less than six weeks, all that eye-popping National Guard military equipment will be gone—and supplanted by thousands of cannabis-economy participants who’ll descend on the Fairgrounds in early December for the annual Emerald Cup. I think it’s a safe bet to say that total containment will have been achieved by then.