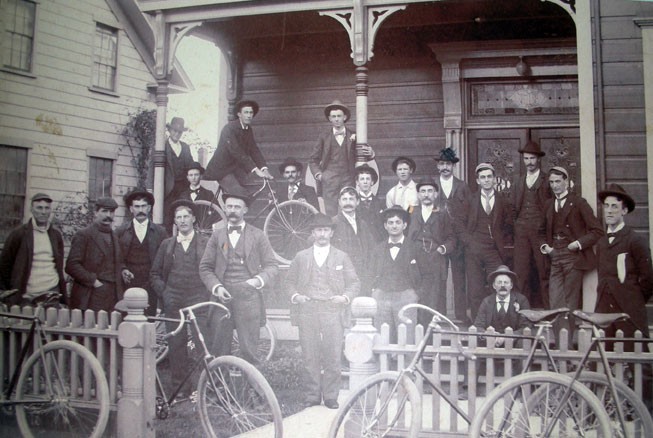 Long, long ago, before the automobile even, cycling was all the rage in Sonoma County. By 1895, there were already three bicycle clubs in the county, just 20 or so years after bikes became readily available to the public.

The Empire Wheelmen of Santa Rosa was formed in the 1880s, apparently spending afternoons popping wheelies and racing on a dirt track at the end of McDonald Avenue. Petaluma and Healdsburg took up in the newfangled fad in the 1890s when they formed the Healdsburg Wheelmen and Petaluma Wheelmen, respectively.

Did they race wooden velocipedes? Maybe highwheel bicycles? Were racers’ handlebar moustaches trimmed for maximum aerodynamic velocity? The answer to all of these is, “No. Stop asking stupid questions.” Their bicycles looked fairly similar to those of today, with metal frames. And no one trimmed his moustache in the 1890s.

Things were different, though. Healdsburg’s races frowned on riders finishing too fast, going so far as to not invite them back. Some older racers were even given hundreds of yards as a head start. At the end of the race, there was also an acknowledgement for finishing last, for it showed grace, control and agility.

Also in the 1890s, a young man named Fred Wiseman was made the manager of a bicycle shop in Santa Rosa. Wiseman was a terrific cycling competitor, but when the Wright Brothers dazzled the nation with the first flight at Kitty Hawk, his imagination turned to the air in the sky instead of the air inside of rubber tires. Cobbling together design ideas from the Wright Brothers with knowledge (and components) from the bicycle shop, he crafted the first airplane the area had known. Later, in 1911, Wiseman would make history as the pilot of the very first airmail flight—made possible because of bicycling’s prominence in Santa Rosa.