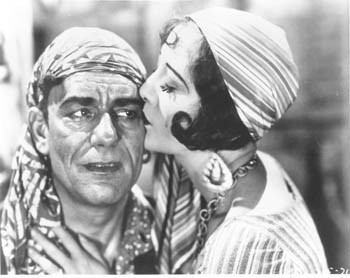 IN THE 1920 movie The Penalty, Lon Chaney Sr. plays a legless villain named Blizzard with a bit of an agenda. He’s (1) using sweatshop labor to equip a socialist army to take over San Francisco, (2) preparing an underground surgery room to deal out biblical justice to the bungling doctor who cost him his legs, and (3) in the meantime posing for a life-sized statue of Satan. Top that, Gary Oldman.

Chaney’s later film The Unknown–in a restored print–will be screened as part of the Sonoma Valley Film Festival (see sidebar). The 1927 silent film, approximately 50 minutes long, was directed by Tod Browning, who did the Lugosi Dracula and the infamous horror tale Freaks. Indeed, The Unknown is an hors d’oeuvre for the latter film, Browning’s later much-censored piece about a caravan of vengeful sideshow performers.

Chaney himself is mostly remembered as a horror-film actor for his roles: his bad clowns, his Phantom of the Opera, his Hunchback of Notre Dame, the top-hatted, hollow-eyed, filed-toothed vampire he played in London after Midnight. But there was another side to Chaney’s career, now being reawakened thanks to Kevin Brownlow’s recent documentary on the once popular actor. “Chaney never got the tribute he deserved,” Orson Welles is quoted there.

Not that the actor was unappreciated. Supposedly, MGM studios had to hire extra telephone operators to handle the flood of calls from blood donor volunteers when Chaney had his final crisis in the hospital; the actor was a passionate smoker, and this killed him at age 47.

What Welles meant was that the measure of Chaney as an actor has never really been taken since his death. The flamboyant and macabre roles eclipsed the art of the performer who played them. Chaney was an actor of tremendous range and broad appeal.

In the 1926 hit Tell It to the Marines, Chaney dispensed with makeup to play a brass-balled, gold-hearted sergeant. In my experience, this has been the only time the dubious old plot about the military molding a wise-guy boy into a man has worked; it’s all owing to Chaney’s mute eloquence in the role of the grimly self-amused leatherneck.

The Unknown is one of Chaney’s most lurid tales, and yet his immaculate acting gives it realistic, tangible pain.

Chaney’s Alonzo the Armless–Chaney’s name “Lon” is short for “Alonso”–knows how to throw knives with his feet. His act, very popular at Circus Zanzi, involves clipping the clothes off his human target, Nanon (Joan Crawford.)

What Nanon doesn’t know is that Alonzo is actually in possession of both arms, which he conceals with a corset. He’s disguising himself from the police, who would be able to pin unguessable crimes on the knife-thrower, thanks to the singular two-pronged thumb on his right hand.

Nanon likes Alonzo armless, though, since she hates the touch of men: “Hands, men’s hands! God would show wisdom if he took the hands off of all of them.”

Alonzo’s mad love leads him into a spectacular gesture of renunciation. But in the end, Chaney’s Alonzo realizes how he’s been tricked by fate–or rather how he tricked himself.

His hysterical laughter echoes all the louder for being silent.