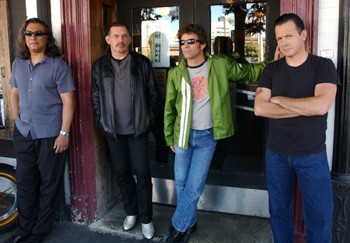 Tommy Castro is home for the holiday

Tommy Castro, the blues-singing, guitar-slinging songwriter and bandleader, is happily watching his kids play basketball at the local YMCA when a reporter’s phone call gets him multitasking again. Home from a six-week tour of Las Vegas, Florida, New England and Canada, he’s enjoying a little down time–which for Castro means only gigging on the weekends. But he’s not ready to relinquish his informal title as “the hardest working man in Bay Area show biz.”

“I think I am,” he affirms. “You ever tried doing this?” And he barks the first of many laughs that punctuate our conversation.

“This” is actively parenting two young children while maintaining a still-burgeoning performing career that has made the Tommy Castro Band less visible at the Bay Area venues where they honed their craft. They’ve been revisiting some of the old haunts this month, and will cap the year with a return to the Mystic Theatre.

Castro plunged into the holiday spirit early this year, cutting a couple of Christmas songs in October. “I wanted to figure out a way to give everyone who’s been supporting us all these years a gift of some kind,” he explains, “and I thought, ‘Why not? We’ve been giving away MP3s for a long time.’

“I’d been singing this Charles Brown song in my head for a long time now,” he continues, “thinking I’d sure like to cut that some time.” So he did, and his version of “Please Come Home for Christmas” became the first of two free holiday downloads from the band’s website at www.tommycastro.com. The other is a rollicking duet with Marcia Ball on “Christmas with My Baby.”

A few weeks later, Castro took a night off during his East Coast tour to be recognized by the Portuguese American Leadership Council of the United States at their annual awards dinner. “It was quite an honor,” he recalls soberly. “I never expected a thing like that. It was very interesting to find out about this organization that I didn’t even know existed before. It turns out these people are very involved in trying to carry on the Portuguese culture here in America, so it doesn’t get lost, like what basically happened to me.” He’s planning to get more deeply involved with them in the future.

After the New Year dawns, it’s only a matter of days before the Tommy Castro Band head across country again, back to Florida for a return engagement on Delbert McClinton’s Sandy Beaches Cruise.

“It’s like having a blues festival out at sea,” Castro enthuses. “Nobody really cares where the boat’s going”–another staccato laugh–“the music is really the focus of the cruise.”

But even such a memorable week as that pales in comparison to the summer tours Castro and his band enjoyed with B. B. King in 2003 and 2004. “That was fabulous. B. B. King’s my hero,” he laughs. “Ever since I was real young, learning to play, I used to listen to B. B.–a lot. So that was one of my favorite times on the road. I would go and hang out and talk with him a few times after the show, and he invited me up to play with him a number of times. I was lucky enough to meet one of my heroes and find out he was a great guy, too.”

Much as he savors such individual moments, Castro remains committed to the four-man band he has fronted for the past dozen years (Randy McDonald on bass, reedman Keith Crossan, and new drummer Chris Sandoval). “It’s not like it’s just me with a miscellaneous backup band,” he says emphatically. “Having players that work together well is real important.” This current lineup is featured on Castro’s most recent CD, Soul Shaker, as well as the band’s recently released live DVD (both from Blind Pig).

But after seven albums and “a couple of million miles of roadwork,” there’s just one tiny little downside that’s emerged: “It makes it difficult to work with other people, is what it does,” Castro says. And he barks that laugh one more time.