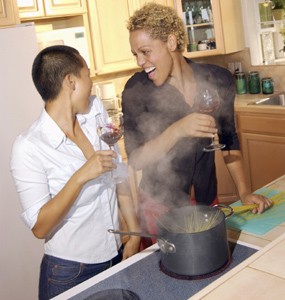 Clip-Art Cookery: Have as much fun as these unknown models by creating a menu based on your New Year’s resolutions! (Or you could just eat a gallon of ice cream with a scotch and Marlboro chaser.)

The body of Christ, the blood of Christ. A pasty wafer and a swig of grape juice. Yep, I remember all of this from Episcopalian summer camp, although what sticks in my mind like a wafer in the throat is the year the pastor gave the campers actual communion and the older kids moshed to get to the chalice in orgiastic, Bacchanalian revelry that was decidedly not holy.

Communion was laid aside with other childhood rituals, and that memory is now simply one in a series of blurry summers spent in Camp Meeker, but there still seems something emphatically irrevocable in the ceremony of ingesting your beliefs. So this New Year’s, I’ve decided to eat my resolutions.

Hippie ceremonies aside, I’m simply going to create a menu that’s based around my New Year’s resolutions and cook dinner for some friends on the first of the year. The recipes that follow are comforting winter recipes that I hope will remind me of the resolutions I’ve made for 2006.

Resolution No. 1 Live within my means.

I tend to indulge my Champagne tastes on what often is a beer budget. While I’ve managed to stay out of the red this year so far (thanks, grandma!), I’m not very good at saving money and tend to spend it as fast as I rake it in. (This is the Waitress Way.) In 2006, I’d like to visit a girlfriend of mine in Brazil with savings in tow rather than a credit card. This plantain soup will help me remember my goal.

Heat oil in large saucepan over medium heat. Add onions, carrots, celery and garlic. Cook uncovered for 3 to 4 minutes, or until onions are soft but not brown. Add chicken stock and bring to boil over high heat. Add plantains, most of the cilantro (reserve a few tablespoons for garnish), cumin and bay leaf. Season with salt and pepper. Return to boil. Reduce heat to medium-low and simmer uncovered for 40 to 50 minutes or until plantains become quite tender. Remove and discard bay leaf. Purée soup in batches in a blender until smooth. Return to the pan. If soup is too thick, add a little more stock. Season with more cumin if desired and garnish with cilantro.

I am one of those annoying people who held five part-time jobs through college, played two varsity sports, tutored two departments, got good grades, attended lots of parties and didn’t suffer for it. I don’t have the boundless energy for that like I did in my late teens and early 20s, so when I try to do it all these days, I usually wind up half-assed and harried. This year, I want to focus on doing fewer things better. For my grounded main dish, I’m going to make a chicken fricassee with earthy mushrooms.

Liberally season the chicken on all sides with sea salt and white pepper. In a deep skillet, heat oil over moderate heat. When the mixture is hot but not smoking, add the chicken, skin side down, and brown until it turns evenly gold, about 5 minutes. Turn the pieces and brown them on the other side, 5 minutes more. When all the pieces are browned, use tongs (to avoid piercing the meat) to transfer them to a platter.

Pour off and discard the fat in the skillet. Over medium heat, add both vinegars to deglaze the pan, then add the wine. Add the shallots and mushrooms, and cook covered over low heat until softened, 3 to 4 minutes. Return the chicken to the pan. Cover and simmer over low heat for 15 minutes. Transfer the chicken pieces to a large warmed platter and cover with aluminum foil to keep warm.

Add the tomato sauce and stock to the skillet; stir to blend thoroughly. Add the cream and cook uncovered over medium heat for 5 minutes. Return the chicken and mushrooms to the skillet, cover and cook over low heat, turning the pieces from time to time to absorb the sauce, for about 10 minutes. Taste for seasoning, and serve.

I got my first taste of French at age 13 when my best friend in junior high school hosted a delicious foreign exchange student, Alex. My vocabulary at that time was limited to poubelle and stilo, but I honed it in my 20s by practicing conversation with my tormented alcoholic French musician boyfriend and visiting Paris a few times. In 2006, I’d like to finally become fluent in this belle langue, perhaps by doing an internship at a winery in the south of that land. So dessert will be chaussons aux framboises (raspberry turnovers).

Line a baking sheet with parchment paper and preheat the oven to 350 degrees. Mix the raspberries with the raspberry jam. After the pastry has defrosted, fold the sheet out and cut it into 4 equal squares. Place the squares on the prepared pan and put in the refrigerator for 15 minutes. Remove the pastry squares from the refrigerator. Place a tablespoon of the raspberries on a corner of each square. Fold the squares into a triangle. Using a fork, press the edges together. Brush the top of the turnovers with some water and sprinkle with sugar.

Place in oven and bake for 15 to 20 minutes or until they are puffed and golden. Serve with vanilla ice cream, whipped cream or crème fraîche.