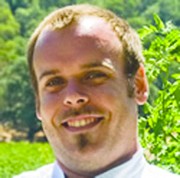 The Revolution Will Be Delicious

When Minnesota native Tucker Hemquist (at right) moved to Sonoma County, he was shocked to find no food co-ops, especially in an area teeming with farms, foodies and year-round produce. So the farmer-chef decided to take matters into his own hands. After amassing a group of volunteers, raising $20,000 in grants and establishing a seven-member board of directors, the Spiral Foods Co-op is well on its way to realizing its brick-and-mortar dream. Unlike traditional grocery stores, co-ops are member-owned, which means that in order to open a store, cafe and commercial kitchen in Graton, Spiral Foods needs community support.

With 101 members, the volunteer-run Spiral Foods Coop is one-tenth of the way to its 1,000-member goal. Membership-equity investments are $300 (payments start at $25), a relatively small price to pay to become part owner of Sonoma County’s first co-op in decades. “We want to meet the needs of our community,” says Spiral member Liat G. Douglas, “by hosting workshops on worm composting or cheese making, by keeping profits local, by offering farmers a consistent market and by creating a convivial community center.”

Learn more at the free “Kick-Start a Coop” potluck on Sunday, Dec. 18, at Bambu Tea House. 9010 Graton Road, Graton. 2–6pm. Stop by with a dish to share and your own eating utensils. Live music by Slowpoke; warm winter spirits available by donation. For more, see www.spiralfoods.coop.—Jessica Dur