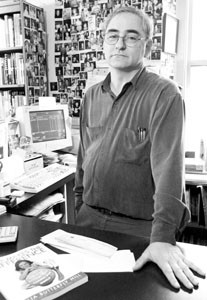 North Bay libraries and bookstores may be little help to FBI

Whoever would have thought that librarians would have a cult following?” asked maverick author and filmmaker Michael Moore. The audience responded with intensified applause, hoots, and yells. Moore had just credited the nation’s librarians with shaming censors at Regan Books into releasing his new book, Stupid White Men. If librarians hadn’t stepped in, says Moore, Stupid White Men would still be in Regan’s warehouse.

Chalk one up for book lovers. But there are endless challenges to intellectual freedom, including the Patriot Act, which became law last year. This new law makes it easier than ever before for the FBI to search the records of libraries and bookstores. It also prohibits librarians, booksellers, and their attorneys from objecting to court orders to produce documents, and from revealing to anyone that they have received such an order.

“If someone comes in and hands you a search warrant, they are authorized to search for whatever they want to search for immediately,” says Judith Krug, director of the Office for Intellectual Freedom at the American Library Association in Chicago. “However, you do have the right to have your lawyer present. He in turn can check the search warrant to make sure that it is in proper form and shows proper cause.”

Hut Landon, executive director of the Northern California Independent Booksellers Association, says that government requests for customer records is a growing problem. “Over the past 5 to 10 years, independent bookstores have become more sophisticated and computer savvy. We’re keeping records of customer purchases, and didn’t before. The police have figured that out.”

Nonetheless, North Bay libraries and bookstores may be slim pickings for the FBI. California legal statues, like statutes in 48 other states and the District of Colombia, protect the privacy and confidentiality of library records that identify individual uses of materials, programs or activities, books, and facilities. To comply with state law and the U.S. Constitution, and also to avoid information overload, many libraries and bookstores minimize record keeping.

Tom Trice, director of the Sonoma County Library System, says, “We protect our patrons’ privacy. The information about what a person reads is erased when the materials are returned.” The Sausalito Public Library and the Napa City and County Library have the same policy. Sausalito’s head librarian, Mary Richardson, says, “The function of our database is to track what goes out and to make sure we get books back. Once the book is returned, that information is no longer attached to that person’s record.”

Similarly, Andy Weinberger of Readers’ Books in Sonoma doesn’t expect the Patriot Act to have much effect on his store, as Readers’ doesn’t track customer purchases. However, like other stores, Readers’ is required by law to retain charge card slips for several years, so that information would be available. “There’s nothing they’d be able to find in the computer except special orders,” says co-owner Lilla Weinberger, and Readers’ deletes special order information every 14 days.

Copperfield’s Books takes the same approach. Rosa Herrington, manager at the Petaluma Copperfield’s, says that her store doesn’t retain customer records, partly in order to protect their privacy. “We have nothing to give them [the FBI]. . . . We’re very concerned about the individual’s privacy and for information to flow freely,” she says.

Barnes & Noble and Borders bookstores also protect customer privacy. Lex Olson, community relations manager at the Barnes & Noble store in Santa Rosa, says, “The only time a person’s name is associated with a book in our computer is when they place a special order.” Special order information is deleted every 14 days, and Olson says that some customers further protect their own privacy by placing special orders under the name “Nobody” or a number or some other anonymous identifier.

This is good news for people who believe that what they read is no one’s business but their own. But the FBI may go straight to the source if they want to. The Patriot Act empowers the government to enter your house, apartment, or office with a search warrant when you are away, conduct a search, seize or copy materials, and not tell you until months later.