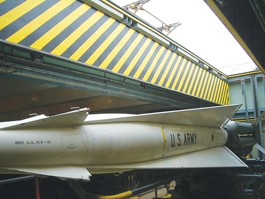 The Nukes in Our Backyard

COLD WATER GRAVEYARD: For a little over a decade, the Marin Headlands stored enough nuclear firepower to decimate our portion of the world.

A loud buzzing, whirring noise alerted us that something was about to happen. The crowd of onlookers leaned against a flimsy metal barricade, and the horizontal metal panels in what had just a minute before looked like a parking lot parted, and up it rose—a nuclear missile.

The crowd gasped. Parents clutched their kids. A louder noise erupted from the secret underground silo, and the 47-foot missile rose from its prone position to point up at the skies majestically.

Called Hercules, the missile would have carried a 40 kiloton warhead in the bad old days—that’s twice the power of the bomb that hit Nagasaki. There were three more missiles just like it in the underground silo and a second silo nearby.

“Hop on, and please grab hold of the missile while we lower you into the silo,” Jerry Feight, a Nike veteran, said as he opened a gate. No one waited for a second invitation. Little boys stood clutching a fin as we were lowered to meet the rest of the Hercules family.

Called the SF-88 Nike Missile Site, this Cold War graveyard is right here in our backyard. It was established in 1952, becoming nuclear in 1962 during the Cuban Missile Crisis. It was hidden in the hills of the Marin Headlands, along with 11 other sites dotting the San Francisco Bay Area. When the United States signed a nuclear arms agreement with the former Soviet Union, we had to destroy the sites so that the Soviets could verify their destruction from satellite.

Years later, a group of veterans appealed to Congress and the U.S. Army Historical Society to restore one of the sites and create a “living museum.” The Marin site is the only one that’s been restored in the country.

“When we opened the restored site,” John Porter, the ranger in charge of SF-88 said, “there were Russians all over the place to make sure it was demilitarized.”

“Every so often there’s still a nice Mercedes limo that drives out from the embassy on Green Street in San Francisco to check up on it, ” laughed Alec Gyorfi, another veteran. “And there’s always a smaller American car that follows it to check up on the Russians. Spy versus spy.”

According to David Kreutzinger, who was one of the last to serve at SF-88, “we are always fighting the last war. During the Cold War, we were guarding against another Pearl Harbor–type of sneak attack. We had Nike Ajax high explosive missiles first. The idea was that we could hit incoming planes and warships before they could get in San Francisco Bay.”

As the nuclear threat escalated and planes could fly higher and faster, the Ajax missiles were replaced with their bigger, more lethal, nuclear Hercules brothers.

The missiles, if they were ever used, could reach a speed of three-and-a-half times that of sound and hit an altitude of 28 miles in three minutes. In the early 1970s, the Nixon administration realized that everyone who could then threaten us had long-range bombers that would not be coming in from aircraft carriers at sea, but directly over the pole. That made the missiles much more of a danger to Americans than to the enemy, and the missile sites were abandoned.

“These missiles still have the highest ‘kill ratio.’ They are more accurate than Patriot missiles,” Kreutzinger said. “And since the systems were analog, they still cannot be jammed by remote signals.”

To be sure they knew where the missiles were heading, there were three separate tracking radars for the missiles, the targets attended by crews in metal portable buildings. In fact, the whole site could be made mobile if necessary. Large trailers carried the missiles. They’d arrive in parts to the sites after being carted through major population centers, and then assembled.

The men who did the work were, for the most part, just teenagers.

“Few of us were over 20 years old. I got here at 19 after a year of training,” Kreutzinger said.

His training was a grueling six hours of classes a day for a year with lots of tests and severe punishments if someone failed to pay attention or didn’t do well on the tests.

“But after all that training, most of the time we just painted, cleaned and mowed grass,” Kreutzinger laughed. There was a very real danger for the men if the missiles were ever employed. Armed with a self-destruct mechanism if something went wrong, the booster rocket alone weighed three tons. The flames from the blast would spread 300 feet, and the decibels of the sound were way above killer level. There was a blast room underground for the crews, but that was not a lot of protection. The crews were apparently expendable.

“But the worst that ever happened to me was I got painter’s cramps,” Kreutzinger said.

That’s because the deterrent Nike program worked. Unlike the shoes, whose motto is “Just do it!,” the earlier, deadly Nikes thankfully just didn’t do it. Test missiles, unarmed, were frequently launched from various sites to check their accuracy and ability to self-destruct. Without the warheads, each missile cost a mere $55,000, so the Army liked launching them.

Instead of feeling threatened, life at the remote site was cold, foggy and lonely for the young warriors stationed there, and boredom was the greatest danger.

“Once a month, the USO would bring in some well-chaperoned young girls for a dance for us. That’s how I met my wife. We’ve been married over 40 years,” Kreutzinger reminisced.

Security was very tight. There was just one road to the headlands then through a long, well-guarded tunnel. The Nike site, manned by 50 to 70 men, also had 20 MPs on duty for security and four attack dogs who each had two handlers. Only the handlers could get near them. They were on duty 24 hours a day.

Gyorfi, who was stationed at a Nike site in South Korea (“For three years, 10 months and three days, but who’s counting”), said the rules were absolutely strict. No flames were permitted anywhere near the warheads, and when a guard there thoughtlessly lit up a cigarette, a dog killed him.

Col. Milton Baldridge “Bud” Halsey of the Air Defense Artillery branch of the U.S. Army, who passed away in 2001, took on the restoration of the site as a labor of love to show the public just what we had averted by not using the deadly nukes and just how prepared we were to do so.

It took a lot of clout to get the Army to release some of their old missile parts from the storage yards in Pueblo, Colo., which the Nike vets described as something out of the closing scene from Raiders of the Lost Ark.

“Missiles were lined up, stacked as far as you could see,” said one.

The old silo was underwater 15 years ago when the work began. Everything had to be rebuilt, and is still being rebuilt by volunteers. They have painted a black line around the room to show the water level when the work began. The Nike Historical Society was formed to organize the many volunteers from the 300 sites the Army had established throughout the world. Porter makes sure that all the docents at SF-88, in the interests of accuracy, study the military specifications even if they are vets, so they have to hit the books again.

Some of the other sites have found new lives. One is a skating rink, another a homeless shelter, but only at the site in the Marin Headlands can the public see what they really were and get up close and personal with a nuke.

“Daddy, if we had seen this back then, would they have had to kill us?” asked a young boy.

The Nike Site is located just past the Marin Headlands Visitor Center below the hostel. Take the last exit before the Golden Gate Bridge when heading south. It is open Wednesday–Friday, 12:30–3:30pm. On the first Saturday every month, there is an open house with Nike veterans serving as docents. 415.331.1453.