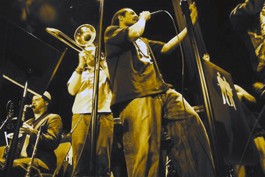 Can you say “best day of Adam Theis’ life”? Because that essentially describes the night two weeks ago when Theis’ band Supertaster was mid-set at Coda, a small club in San Francisco’s Mission District, and someone whispered in his ear that Stevie Wonder had just walked into the room.

To put it mildly, Theis and his fellow band members are fans. They know nearly every Stevie Wonder song written and host an annual Stevie Wonder birthday tribute. So at nearly 2am, when Wonder approached the stage and grabbed the mic, it’s a minor miracle they were able to stand up, let alone play their instruments.

It was the stuff dreams are made of. For two songs, “All Day Sucker and “I Can’t Help It,” Stevie Wonder sang while Supertaster held it down and made Mission District history. Afterward, Wonder hung out, posed for photos and dispensed sage advice and encouragement to the band. Theis still can’t believe it happened. “Someone would have to come back from the dead,” he told me on the phone the next day, “for it to be better than Stevie Wonder.”

That window of opportunity comes this weekend at Hopmonk Tavern, where Theis and his 18-piece Realistic Orchestra (above) pay tribute to Michael Jackson. Since Jackson’s death earlier this year, everyone from Madonna to Beyoncé has dropped Jackson staples into their set; expect the Realistic Orchestra to dig deep beyond the King of Pop’s obvious hits (“Billie Jean,” Theis says, is demoted to medley status). The tribute sold Yoshi’s out in August, so expect a packed dancefloor on Friday, Oct. 9, at 10pm ($10&–$15).

Speaking of packed dancefloors, after eight years at Jasper O’Farrell’s, the popular reggae Monday Night Edutainment with DJ Jacques and DJ Guacamole moves to Hopmonk this month with touring dancehall juggernauts that couldn’t fit on Jasper’s small stage. “I’m incredibly excited to have a bigger stage and a high-end sound system so we can bring in big acts,” says Jacques, who’s booked a double bill of Warrior King and Gyptian for Nov. 16 with a full band, “which is a fantasy I’d always hoped for on a Monday.”

Jasper’s and Jacques had no falling out. “The main complaint was that it was too packed! Growing up in Boston and going to house parties in the projects, I like a tightly packed party,” Jacques says, “but I understand.” Pam the Funkstress, the DJ for the Coup, moves the crowd this Monday, Oct. 12; 9pm; $5, ladies free before 11pm. Hopmonk Tavern, 230 Petaluma Ave., Sebastopol. 707.829.7300.