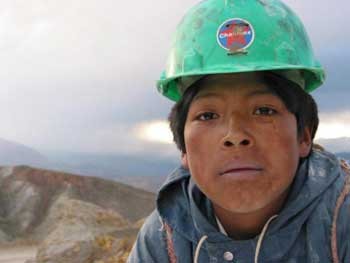 Devil’s Due: Young Basilio mines for silver in the realm of the Devil.

John Trudell is a Native American poet whose verbal clashes with the U.S. Government have made him the stuff of underground legend. Basilio is one of 800 optimistic Catholic children who has come to rely on the Devil to protect him while working in the silver mines of Bolivia. Gail Small, Evon Peter, Barry Dana and Mitchell and Rita Capitan are all activists with a strong sense of the land whose efforts for environmental justice have tied them together in a powerful spiritual quest. Lonnie Frisbee was an influential hippie preacher and Jesus movement fire-starter whose secret lifestyle ultimately led to his being erased from the born-again history books.

If this colorful cast of characters sounds like a guest list for the year’s most stimulating dinner party, you’re not far from the truth. Trudell and Frisbee and the others—including the sweet-faced, devil-worshipping miner boys of the Cerro Rico mine—all start their own lively, even somewhat spiritual, conversations this year at the 28th annual Mill Valley Film Festival. The movies that tell these individuals’ remarkable stories—Trudell, Frisbee: The Life and Death of a Hippie Preacher, Homeland: Four Portraits of Native Action and The Devil’s Miner—will be screened in Mill Valley and San Rafael along with 22 other documentaries, and over 120 short films, features and international imports.

This year’s lineup does not skimp on the big-ticket movies with major stars, including premieres of Richard Gere’s Bee Season, Steve Martin’s Shopgirl, Charlize Theron’s North County, Pierce Brosnan’s The Matador and Keira Knightley’s Pride and Prejudice. It also boasts the requisite pack of fun-filled tributes to major in-person personalities: Jeff Daniels, Felicity Huffman, Donald Sutherland and director Jean-Pierre Jeunet. But it is the smaller, more personal films, and especially the documentaries that, for this film-festival fan anyway, seem to leap from the catalogue and demand to be seen.

Mark Fishkin, executive director of the festival, agrees, predicting that the documentaries will be particularly popular at this year’s festival.

“The last couple of years, documentaries have become surprisingly popular, so that they are suddenly a very strong staple of the specialty-film industry,” says Fishkin. “Our documentary program has always been singled out as being especially strong, and many of the documentaries we’ve shown or premiered here have gone on to great success at other festivals. Many have had success theatrically and some have won Oscars. This year, I think the schedule is not only stronger than it’s ever been, but it’s even more comprehensive in terms of the huge number of documentaries we have this year. All of them tell great stories about people you might never hear about otherwise.”

Trudell, directed by Heather Rae, is a remarkable piece of political storytelling, powerfully told with slightly gonzo frills, and with Trudell himself at the glowing, mystical center. The Native American activist, part of the group who occupied Alcatraz in the late ’60s, was labeled a threat by the FBI because of his articulate activism, which may have led to the still-unexplained death of his young wife. His response to tragedy was to turn to poetry and music and, appropriately, this new cinematic biography is fused with music and words and unforgettable imagery.

Likewise, Roberta Grossman’s elegant Homeland: Four Portraits of Native Action finds and celebrates the vibrant spiritual bonds that unite its central characters, five environmental activists from four corners of America, each working to save an important piece of Native American land. These interwoven stories are told with astonishingly good cinematography, setting each story solidly inside the environment that is being threatened, while also exploring the human stories of the indigenous people who call that land home.

“We intentionally selected Trudell and Homeland, and even the children’s film Spirit Bear, as part of a sort of subtheme dealing with Native American and environmental issues,” says Fishkin. “These are issues that not only impact the Native American community, but also impact the whole world. These are important films, but they are also very entertaining films. They deserve to be seen, and we are happy to be showing them.”

The spiritual themes that arise in Trudell and Homeland take a different shape in The Devil’s Miner, by acclaimed documentarians Kief Davidson and Richard Ladkani. Following the optimistic 14-year-old Basilio into the horrific silver mines of Bolivia’s Cerro Rico (“rich mountain”), the film explores the relationship Basilio and hundreds of other children have developed with Tio, the Devil, who they believe rules the world beneath the surface, and to whom the miners have built altars in every tunnel of the massive mine in which they labor. The surprise of the film is how uplifting and engaging it is, an homage to the creativity, resilience and endurance of the human soul.

Those themes continue in yet another unique incarnation, David Di Sabatino’s Frisbee: The Life and Death of a Hippie Preacher, a well-balanced look at Lonnie Frisbee, the charismatic born-again flower child who, in the Jesus movement of the late ’60s and early ’70s, was instrumental in creating the Calvary Chapel and Vineyard ministries of Southern California. Frisbee died of AIDS 20 years ago, and the leaders of Calvary Chapel and the Vineyard—two chains of “nondenominational” Christianity that now number in the thousands—have systematically worked to wipe the painfully conflicted Lonnie Frisbee from their collective memories. San Francisco filmmaker and historian Di Sabatino was raised in a Pentecostal church, where larger-than-life individuals like Lonnie Frisbee were set up as anointed figures and examples of men upon whom the spirit of God rested heavily.

“That’s how you get legendary status in the Pentecostal born-again Christian world,” says Di Sabatino. “You establish a reputation as a vessel through which the Holy Spirit is seen to be moving. And that’s how I first came to know of Lonnie Frisbee: as a vessel of God. Years later, as I began to do more research, I came to realize that Lonnie was a much more complex character than just a simple ‘tool of God.’ Lonnie struggled in his mind with own homosexuality, which he saw as sexual dysfunction. From a conservative evangelical point of view, stuff like homosexuality is buried under the rug, but I didn’t want to do that. I said, ‘Lonnie was who he was, his story is what it is—let’s talk about it.'”

The film is a fascinating flashback to the electrifying Jesus movement days when young, long-haired Christians, enthused by their recent conversions from drugs to Jesus, attempted to change the world for the better. It’s ironic that Frisbee, whose eloquent improvised sermons about the family of God and the love of God stirred the hearts and souls of a multitude of young people, ended up being ostracized from the very “family” he helped to create.

“Regardless of where you come down on the ‘gay issue,'” Says Di Sabatino, “I don’t think it is right for Christians to ostracize and exclude other Christians who’ve done so much to serve God. To deliberately erase Lonnie Frisbee from the written and spoken history of the Jesus movement is not right either. Regardless of what you think about Lonnie’s struggle—and this is such a huge, hot issue in conservative churches—we still shouldn’t be treating these people with that kind of contempt. Lonnie believed that God had an invitation for everybody, and the church is saying, ‘Everybody except you—and you and you.’ I think the church needs to take a hard look at that.”

“It bothered me that so many people have no idea who this guy was,” says Di Sabatino. “If this movie helps people meet him for the first time, or helps them learn what he was really like and what he accomplished, if it touches people the way Lonnie believed God could touch people, than the movie will have done its job.”

The Mill Valley Film Festival runs Thursday-Sunday, Oct. 6-16, at the CineArts Sequoia and the 142 Throckmorton Theater in Mill Valley, and at the Christopher B. Smith Rafael Film Center in San Rafael. Theater tickets are $10; prices for special events vary. 925.866.9559. www.mvff.com.