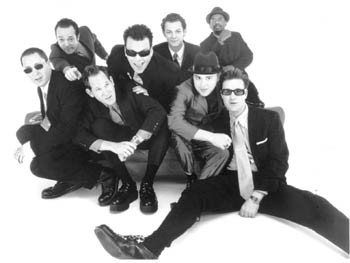 Dicky Barrett, lead singer for the Mighty Mighty Bosstones, knew when the band released their 1997 CD Let’s Face It, chances were good that it would be a commercial breakthrough. When the Boston group arrived on the national scene in 1990, they were one of the few bands playing ska. And their sound, which reshaped the skanking sound of ska by adding a strong element of energetic punk rock, put a decidedly different twist on the more poppy and soulful style of late-’70s, early-’80s ska groups like the Specials, Madness, and the English Beat.

But by the late 1990s, the times had caught up with the Bosstones. Ska was widely viewed as the next big trend in alternative music, and the Bosstones were sure to benefit. That thought worried Barrett perhaps more than it excited him. He wondered if long-time fans would think the Bosstones had sold out by reaching a larger audience.

“Well, it was scary with the last album,” the gravel-voiced singer says. “I think a lot of the success, I don’t really take full credit for. At that time, in 1997 and 1998 a lot of things were happening musically. Green Day was all over the radio. Rancid was on the radio. You can talk about No Doubt.

“The list goes on. So the musical climate and the temperature at the time to be the Mighty Mighty Bosstones, it was perfect. So it was natural that we ended up on the radio, too. But we were also afraid of that because we’d been a band for so many years. We’d been the Bosstones when Motley Cure and Quiet Riot were a band. And then when grunge became really popular, we were still the Bosstones. And we remained true to what we are. But then all of a sudden what we were doing became suddenly popular and you can use the word trendy. So we were a little bit afraid.

“But once we got over that hump and people said now the rest of the world knows what I knew all along and our fan base and our core audience, all those other terms, and our friends and the people who had been supporting us for so many years, once we realized they were proud of us and said it’s about time and we’re glad you guys are successful, then you’re able to do whatever you want,” Barrett adds. “Now we’re completely fearless. We’re afraid of nothing.”

Perhaps one reason the group’s core fans stuck with the band was because the Bosstones tried to avoid any perception that they were trying to cash in on the popularity of ska–even as Let’s Face It was going platinum and spawning the radio hits “The Impression That I Get” and “The Rascal King.”

“The same people who were saying ska is the next big thing, are the same exact people who are saying ska is dead,” says Barrett, explaining why the Bosstones tried to distance themselves being part of the ska revival. “It’s like, I knew that it didn’t matter. It was more important for us to be the Bosstones than to be flagwavers for ska as a trend. For years ska was a musical style and a type of music that we have a passion for, that’s fine. We’ll wave that flag. But ska as a trend, to me, is bogus because that comes from bogus people, people who say it’s the next big thing, until all of a sudden what Korn and Limp Bizkit do becomes popular.

“Ska as a musical styling and as a type of music we’ve loved for years. That will always exist, if for no other place, it will exist in our hearts.”

Now the Bosstones have graduated from cult status to mainstream popularity without losing their core audience or their integrity, and Barrett realizes the band can work from a real position of strength. And the creative freedom and fearlessness the band felt influenced the latest Bosstones CD, Pay Attention.

“It allowed us to allow the songs to be exactly what they wanted to be and not say does it have to be this or should we do that,” Barrett said. “That’s something we’ve never really done, but within, the freedom seemed so right. It seemed so endless. And to not take advantage of it, to not say people who like the Bosstones like the Bosstones because they’re the Bosstones, and that’s up to us to decide who the Bosstones are (would have been a mistake). We have great followers, great supporters and great people who enjoy the Bosstones. We’re stoked … I think that it’s a wonderful gift and a really really good album to the people who have been supporting us for so many years.”

Songs like “Let Me Be,” “Where You Come From” and “A Temporary Trip” are among the songs that fit the band’s familiar hybrid of horn-laced punk and ska. But there are also some twists. For one thing, the band’s ability to craft strong vocal melodies–a talent that especially blossomed on Let’s Face It–has grown even more prominent on Pay Attention songs like “Sad To Say,” “The Skeleton Song,” and “All Things Considered.” “I think I’ve run from it in the past, and I think that because I came from punk rock, I think I ran from melody,” Barrett said. “But I’ve always loved songs. I’ve always loved good songs and I’ve always loved music. I don’t think I’m a tremendous singer. I think I write really good lyrics and I think that when it comes to performing the Bosstones songs live on stage, I’m good at it. But I think it was more there’s nothing to be afraid of. Why be afraid of melody? If I have the ability to sing a song, why not sing a song? And I think there’s still a lot of energy that can come out of a really solid melody.”

The CD also puts more emphasis on the guitar work of Albert–particularly on “Allow Them,” “Finally,” and “I Know More”–tunes that all lean more toward a straight-ahead rock sound. This move was inspired in part by the impending departure of Albert so he can spend time with his ailing mother.

“Nate being an exceptional guitar player, such a great guitar player, we decided that maybe this album should be, although we’ve done guitar heavy songs in the past, let’s not be afraid to really show Nate for the kind of player he is,” Barrett says. “We knew up on our radar screen was the very realistic possibility, and at certain times I’m sure we were in denial that he wasn’t going to be able to tour because of the condition his mother’s been in for many many years. And being on the road with her being as sick as she has been, there was a realistic possibility that he wouldn’t tour anymore. So it was kind of a tribute to him that when people talk about the Bosstones years from now, if they talk about the Bosstones, it would be a shame for it not to be said that Nate was an amazing guitar player.”

After the CD was completed, Albert indeed left the group. And while Barrett holds open the possibility that Albert could contribute to CDs in the future, the group is moving forward.

“It’s difficult,” Barrett says. “He’s our brother and he’ll forever be a Bosstone. He was there from the beginning and he was there as long as he could be. But his mother is sick. Every time he was on the road, he lived with the fear that she would pass away and he was going to live the rest of his life thinking I should have been there to take care of here. I should have been there. He didn’t really want to go through that again. And whatever happens will happen, but he is comfortable knowing he’ll be able to take care of his mother.”