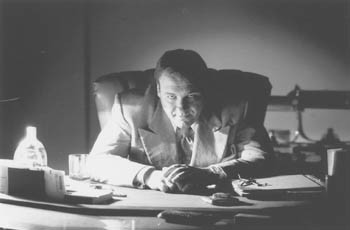 ‘The Man Who Wasn’t There’

Coen brothers disappoint with ‘The Man Who Wasn’t There’

Why does The Man Who Wasn’t There lack the kind of advance buzz you’d expect from a movie that follows O Brother, Where Art Thou? It’s because the Coen brothers–Joel, directing and co-writing; Ethan, producing and co-writing–have failed to get a handle on the themes in the writing of James M. Cain, in stark contrast to their lovable Raymond Chandler parody, The Big Lebowski.

The mostly humorless The Man Who Wasn’t There represents the Coen brothers’ salute to Cain’s fatalistic novels, especially The Postman Always Rings Twice. Here, as in many other examples of today’s neo-noirs, we see the stately moviemaking style usually inflicted on grand literature. That’s what happened when Cain’s vivid, greasy pulps became regarded as classics.

The film is set in Santa Rosa in 1949–but don’t expect to see any recognizable scenery, since The Man Who Wasn’t There was shot in Southern California (see sidebar, “The Film That Wasn’t There.”) Billy Bob Thornton stars as Ed Crane, a morose barber looking for a way out of his job. A slick out-of-towner named Creighton (Jon Polito) entices him with a business plan for a radical new method for cleaning clothes without water, using only chemicals–“dry cleaning” it’s called.

Ed needs $5,000 to buy into the business as a silent partner. Meanwhile, the barber starts to suspect that his wife, Doris (Frances McDormand), is sleeping with her boss, Big Dave (James Gandolfini), owner of the local department store. Crane decides to blackmail Big Dave for the money to pay Creighton. The plan goes wrong, and Big Dave ends up dead.

The first half hour is slick, economical storytelling. Thornton is, at first, amusingly unrecognizable. He seems to have been starched. His mouth is collapsed in disapproval, his hair slicked back into a stiffly clenched pompadour, à la Hugh “Ward Cleaver” Beaumont. In Texas, it’s said of such a man that “you can’t get a toothpick up his butt with a jackhammer.”

Thornton cuts back his dialogue to a bare flickering response, and only his deep grumbling voice hints at the inner anger beneath the unemotional talk. The typical Cain character had big, splashy appetites. But for some reason, the Coens squeezed a bottled-up Jim Thompson nut case in a Cain plot.

Otherwise, the Coens follow the Cain scheme so closely that they even load in a lumpy third-act subplot about a local girl named Birdy (Scarlett Johansson), whose classical piano playing touches something in Crane’s heart. This discursion sticks out as badly as the passage about the lady lion tamer in The Postman Always Rings Twice.

Apparently, for Cain, sections like this were meant as new avenues of hope for our rat to run down before he ended up in the trap. If a Cain character avoided falling into a pit, the author grabbed the hole and moved it–as Bugs Bunny always did–so we could see the plummet we were waiting for.

As critic Edmund Wilson complained of Cain’s writing, “We find ourselves more and more disconcerted at knocking up–to the destruction of illusion–against the blank and hard planes and angles of something we know all too well, the wooden old conventions of Hollywood.”

The Coens’ film looks avant-garde, but it evinces those wooden conventions: overproduction and acting with quotation marks around it. Photographer Roger Deakins’ black-and-white images are as pristine and spotless as Crane’s barber’s tunic. Deakins, the Coens’ regular cinematographer, is an expert at nostalgia, but nostalgia is probably the last quality a Cain-oid film needs.

Our moneyless barber lives in a showpiece house and works in a barbershop as big and clean as an operating room. Similarly, the acting is showy. There’s never any doubt in our minds who everyone is–and doubt should be part of a mystery.

Except for Gandolfini’s Big Dave (Gandolfini, best known as Tony Soprano, always shines in the role of a jolly but lethal type), the supporting acting seems too broad for suspense.

Michael Badalucco, who played Baby Face Nelson in O Brother, Where Art Thou?, shows up as Ed’s racketing, pestering brother-in-law who owns the barbershop.

Polito looks like Akim Tamiroff. He wears a toupee that, like Tamiroff’s rug in Touch of Evil, seems to have a life of its own–but when an actor reminds you of how relatively restrained Akim Tamiroff was, he’s overdoing it.

This is also the kind of Bizarro-world film when McDormand (best known for her starring roles in such Coen brothers’ films as Blood Simple and Fargo), an actress who radiates modesty and decency, plays the bad girl, and Johansson, a humid Lolita, plays the good girl. Throughout, the acting displays the usual problem with the Coens’ primarily serious work. Here’s cartoonish evil without cartoonish wit or energy; here’s dialogue that’s flamboyant and yet self-conscious.

The Coens’ most serious work is usually inferior to their comedies. Barton Fink and Miller’s Crossing are tragedies punctured by gross caricature. Despite strange and exciting passages, they’re mostly unwatchable. In the much better Fargo and Raising Arizona, the comedy is ascendant.

And The Man Who Wasn’t There, a tragedy, isn’t just gross but frigid. It’s probably the most strangely conceived film with the mark of Cain since MGM went prestigious with the Lana Turner version of The Postman Always Rings Twice.

The Man Who Wasn’t There recalls film critic Manny Farber’s famous dialectic: white elephant vs. termite art. By “white elephants,” he meant cluttered big-budget films that aged badly into the kind of relic you find in a thrift store. These films decayed compared to the work of slapstick comedians and film-noir directors, low-budget talents who nibbled around the edges of Hollywood, working under the wire and under the radar.

The Man Who Wasn’t There is meant as termitey film noir, but it has a terminal case of white elephantiasis.

From the November 8-14, 2001 issue of the Northern California Bohemian.