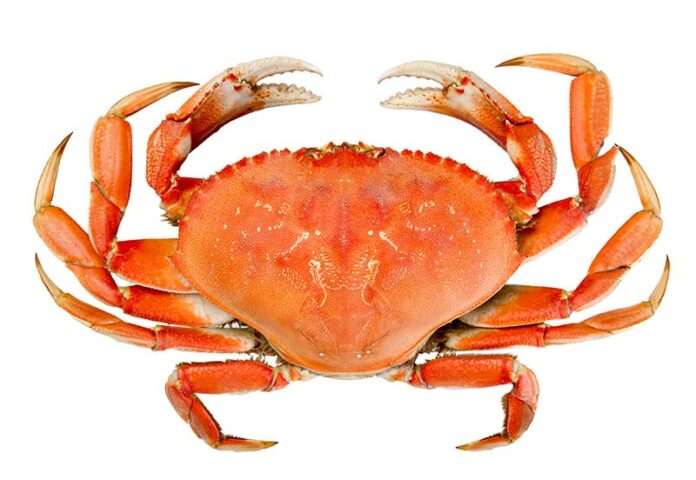 Get extra mileage from your holiday crabs

It was the day after Christmas and the Tupperware tub was loaded with the last of the Dungeness. I had a mess of crab to contend with, all pre-cooked, cracked and cleaned at wondrous Oliver’s Grocery.

The refrigerator was a little bare beyond the crab, but I did spy the remains of an extra-pungent hard slab of goat cheese, also from Oliver’s. A plan formed in the hungry mind.

Bounce quick to the Bolinas People’s Store for some bacon, eggs, butter, milk. Grab a bouquet of parsley and some fruit. You see where this is going: frittata country, by way of a pastry-free quiche—through the corridor of an attempted omelet. I broke out the junior skillet and sawed off a quarter of the bacon.

Into the pan: some scalloped sweet potato and an old red onion from the larder, diced. Into the bowl: four eggs, a splash of milk, a fistful of chopped parsley, and all the rest of the crab, shredded. Let the baconian activities in the skillet proceed awhile. You’ll know when it’s time. Pour the eggs into the sizzle, add the goat cheese. This is getting good. Let it burble a little while longer.

Now transfer the skillet to the oven for a proper finish, 10 minutes at 350 works for me. In the meantime, make some toast and coffee while cranking Big Mama Thornton’s “Wade in the Water.” Think about the government, or a woman you met. Chunk up a cantaloupe for a refreshing counterpoint to the rich burbling mess in the pan. Eat the damn thing.

Is this the Scariest Halloween Photo Ever?