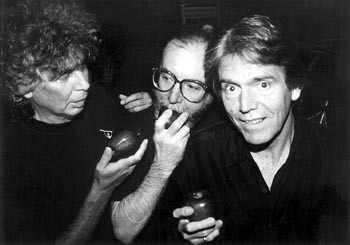 The Inn of the Beginning

Inn of the Beginning turns 30

IN THE BEGINNING, Greg Cochrane simply needed some rest. It was 1968 and Cochrane was holding what his close friend and fellow Sonoma State University student David McNair recalls as “a permanent party going on all summer. He said that if he was ever going to get some sleep he had to move the party.”

Simple enough. Cochrane, 22, rented the space of a defunct Italian restaurant in downtown Cotati, and on Sept. 28, 1968, his summertime bash became the original incarnation of the Sonoma County entertainment institution The Inn of the Beginning.

“I gave it the name because it was a new beginning for a lot of people who really had nothing else going for them,” says Cochrane, who does say he thought of the club’s title while on LSD. “We wanted to keep things friendly and localized and play really soulful music.”

Thirty years later, those goals remain intact. Cochrane’s core philosophy has been retained and refreshed by a string of owners leading to the current trio of Miranda Fredrick, Scott Wagner, and Scott Goree, former owner of Magnolias in Santa Rosa. “[The Inn] has always been the heart of the Cotati scene for music and art. And for its youthfulness and exploration and optimism. It’s also the social gathering place and the heart of the North Bay musical community,” remarks Frank Hayhurst, former co-operator of the Inn, member of the Bronze Hog (the first band to grace the stage at the Inn), and owner of Zone Music in Cotati. “Cotati’s personality is defined by the club.”

Cultural landmark status aside, the Inn’s most impressive feature is its past and present commitment to live music–all of which will be celebrated this weekend when the Inn marks its anniversary with a celebration that will feature, among others, the Legendary Bronze Hog.

“We all enjoyed music and we wanted a venue for ourselves,” says Cochrane.

Citing “burnout,” Cochrane sold the club in 1970 to Ward Maillard (son of a U.S. congressman and Sonoma County artist Elizabeth Quandt). Maillard, who once spent months building a gigantic rock and fiberglass urinal, lost interest after several years and in 1974 sold the Inn to his manager, Mark Braunstein, a former roadie for Janis Joplin. “I had a lot of pride in the club, and what I really liked was presenting new music and exposing the audience to music they would’ve not normally heard,” says Braunstein, whose connections in the music industry and knowledge of production attracted many big-name acts to the local club scene.

“It’s remarkable the people that were coming through the doors in those early days,” remembers Cotati Mayor Richard Cullinen, who tended bar at the Inn in the mid-70s. “Van Morrison popped in frequently and Neil Young was there. I used to sit down and talk to Jerry Garcia when he played there with Merl Saunders.”

Considering the size of the venue, the list of acts that have taken the stage in Cotati is staggering. For instance, the Grateful Dead played every Tuesday for a while, trying out new material on a live audience. Neil Young played unannounced one night for a case of beer and some pizza. A fledgling Jackson Browne was denied an audition after he admitted he was from Orange County. Ramblin’ Jack Elliott introduced a young Arlo Guthrie, who then graced listeners with the first-ever stage performance of his classic “Driving into Los Angeles.” According to Cochrane, Janis Joplin reunited for a short set with Big Brother and the Holding Company just months before her passing.

Braunstein ran the Inn until 1982, when he merged with downtown rival the Cotati Cabaret to form the lengthy-titled but short-lived Inn of the Beginning at the Cotati Cabaret. He left the old building at 8201 Redwood Highway amid a leasing dispute, and the Inn lay silent for years.

AFTER FAILED STINTS earlier in the decade as an antique store, a bookstore, and a beer-vending coffehouse, the Inn is back as a fixture of downtown Cotati. A year ago, Fredrick and Goree gained managerial control of the Inn and, together with longtime sound technician Randy Teaford, have since infused the club with the same creative energy that once fueled founders Cochrane and Braunstein.

While the Inn may no longer have access to the big names it once did, it has become a vital steppingstone for local acts. Virtually no homegrown band can emerge from Sonoma County without having played the Inn.

“If people are playing in garages, it doesn’t help anyone. The main thing is providing a place for people to play [in public],” says co-owner Goree, who began coming to the Inn in 1968 as an SSU student.

Co-owner Fredrick, formerly known as DJ Lili Pond on KFGY (92.9FM), adds, “We have great nights here with local talent. The Inn is a great launching pad and it’s home to a lot of bands.”

Goree and Fredrick’s booking philosophy presents a different musical style nearly every night of the week. “Around here you simply can’t concentrate on one type of music or demographic,” adds Goree. “You have to mix it up with different shows. Places that exist as solely blues clubs or punk clubs are very short-lived.”

Indeed, the Inn is a smaller act’s dream.

“The vibe is what really makes this place work. It’s in rooms like ours where music really happens. You realize that you’re lucky to be so close you can check out a performer’s dental work,” says Teaford. “Our history and the casual yet efficient way of producing shows have made our reputation.”