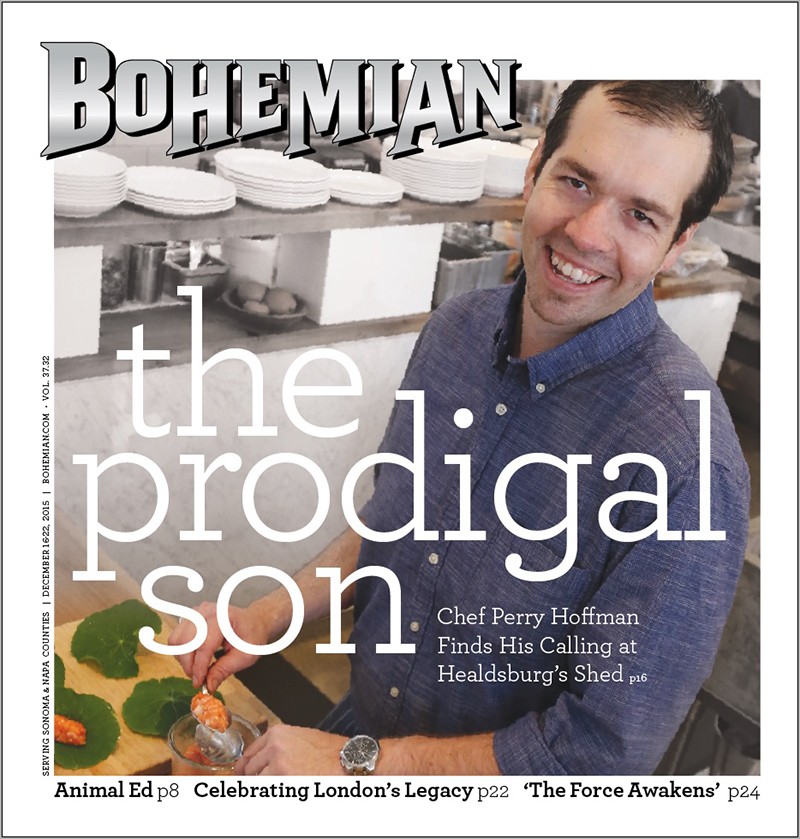 Perry Hoffman comes from a family of chefs, cooks and gardeners. His grandparents founded the French Laundry and the Apple Farm in Philo. His uncle owns the excellent Boonville Hotel and restaurant. His father is a celebrated gardener, and his mother is a great cook and well-known florist in the Napa Valley. So it’s no surprise that he developed a passion for food at an early age.

“I had this crazy love for it when I was young,” says the 31-year-old chef.

Over breakfast one morning when he was 15, he told his parents he wanted to cook for a living. They didn’t hesitate to tell him what they thought of the idea.

Hoffman chose to focus on the latter part of that advice, and it seems to have worked.

In September, Hoffman was named culinary director at Healdsburg’s Shed, a combination restaurant, event space and gardening, cookware and food market. In spite of 10-hour (and longer) days and a commute from Napa (he and his wife are looking to move closer), he exudes the happiness and enthusiasm of someone doing exactly what he wants to be doing.

“This a dream place,” Hoffman says with a beaming, easy-going smile. “I can learn. I can teach. I can be excited.”

And, of course, he can cook. Quite well, in fact.

The vegetable-centric menu that Hoffman and his cooks have created is accessible and refined, and displays a creative mind, a steady hand and a reverence for locally sourced ingredients. Every restaurant these days claims to be farm-to-table, even though some of those farms are 1,000 acres and grow just one crop in the Central Valley. But Hoffman takes his commitment to locally sourced produce and ingredients to a deeper level. And why not? It’s all around him.

Hoffman sources as much produce as possible from Shed owners Cindy Daniel and Doug Lipton’s 20-acre “HomeFarm” in Healdsburg. Ingredients also come from a who’s who of Sonoma County growers—some even come from the planter boxes in front of the restaurant. He has taken Shed’s mission of providing the tools and ingredients for good living to heart. “For me,” he says, “this whole building was built for a sense of community and coming together, so the food needs to come together too.”

He means that literally. Hoffman’s plates have a natural, fresh-from-the-garden look that belies the thought and finesse that goes into them. Leaves of greens, herbs, flower blossoms, dabs of sauce and delicately placed slices of fish or meat mingle in a casual but thoughtful manner on the plate. There is no tidy separation of meat, starch and vegetables, but rather an artful commingling.

The menu may be rooted in Northern California and Mediterranean cooking, but it borrows ingredients and techniques from Vietnam, the Middle East, India, Japan and elsewhere. More often than not, the focal point is a vegetable or herb, not a hunk of meat. “Protein is almost always an afterthought,” Hoffman says.

Cooking with what is available in the garden was part of Hoffman’s early training at the Boonville Hotel. “There was no plan,” he says. “It was just, ‘Go into the garden and find something.’ I learned to cook that way because it was required. That’s what really got me into the garden.”

The list of starters is a good example of the chef’s visual and culinary aesthetics. The Pacific yellowtail sashimi is a garden on a plate. Buttery slices of sliced, opalescent yellowtail share space on a wooden platter with sliced kumquats, butter-lettuce leaves, spicy peppercress and a dusting of togarashi, dried Japanese peppers. The varied flavors and textures work superbly together. The Preston Farms carrot salad is another emblematic dish. The sweet, earthy flavors of carrots, dates, lettuce, nigella seeds and a thick stripe of Straus yogurt play harmoniously in the mouth.

Heartier dishes are just as good. I can’t think of a better rainy-weather meal than the braised beef cheeks made into stew with sliced fuyu persimmons, savory cabbage and garnet yams in a light veal broth. The addition of pink peppercorns plucked off a local tree adds a finishing high note of aromatic spice. Pizzas made in the kitchen’s hearth-like wood-fired oven are thin, crisp and chewy, and topped with unexpected ingredients like sunchokes, roasted slices of Meyer lemons and manchego cheese.

“At the end of the day it’s just food, but it really needs to have a soul and a purpose and a vision,” Hoffman says.

He points to a beet and green farro dish as an example of how he approaches cooking. His aim is to create a balance of flavors and textures that riff off a key ingredient, in this case the farro verde, a nutty, chewy, wheat-like whole grain that, when roasted, attains a delicate, smoky flavor. The beets echo the bass notes of the farro, while crèma de lardo (buttery emulsified pork lard spread on little toasts) pays homage to the grain’s Italian roots.

“We’re doing everything we can to complement the flavor of that grain,” he says.

But reliance on one dominant flavor can go too far, as it does with the salmon tartare. The salmon is fresh and delicious, but the nasturtium leaf served under it overpowers the flavor of the fish and other ingredients.

While his food has a cerebral aspect to it, Hoffman wants to avoid a menu that’s too precious, a criticism some have leveled at Shed for its high-priced cookware and fancy foodstuffs. That’s why he was pleased to see a vineyard worker with muddy boots and pruning shears in his pockets
stop in with his family one night and order a beer and plate of salumi.

“I always want to have a place for that guy,” Hoffman says.

Being excited, and even a little anxious, is a motivator for Hoffman. His first kitchen job was at the late Zinsvalley in Napa, an experience he calls his culinary school. He’s never taken a cooking class.

“I was a really good employee because I was nervous,” Hoffman says. “I always joke around that you cook your best when you’re nervous. That was something that [Zinsvalley] chef Greg Johnson taught me. He said, ‘When you’re comfortable here, I want you to leave. I want you to go someplace where you’re nervous, because that means you’re learning.'”

It’s become an adage Hoffman lives by: Work where you can continue to learn.

“That’s why I made the decision to come here,” he says. “I never had the chance to make kombucha. I didn’t know a lot about it before I came here. For me that was incredibly exciting but also nerve-wracking, because I don’t like not knowing.”

Now that Hoffman is a bit older, he thinks of the nervousness as excitement and creative stress. “That’s a big part of what drives me,” he says.

Andre Moussalli was Hoffman’s sous chef at Domaine Chandon’s Étoile restaurant in Carneros for seven years where Hoffman was executive chef. Moussalli was impressed with Hoffman’s culinary vision and work ethic, and points to his efforts to start a garden and microgreen operation from scratch on an underutilized piece of land in the vineyard.

“It’s just mind-blowing how he accomplished all that stuff,” says Moussalli, who was, given Hoffman’s passion for marrying cooking with gardening, happy to hear about his position at Shed. “That’s his dream job,” he adds.

Rita Bates, a cousin of Hoffman’s who gardens and cooks at the Apple Farm, says the more casual style of cooking at Shed is better suited to his personality, as is the open kitchen.

“He just loves it,” she says. “It’s just exactly what he wants to be doing.”

While Shed is blessed with great product, the kitchen posed some challenges. The downstairs kitchen is just a counter and a wood-fired oven. Upstairs, there is a full production kitchen where a lot of the prep is done, but during meal service there is no running up and down the stairs. That means the staff has to be strategic. Because there is no stovetop or hood downstairs, there are a few more cold or room-temperature dishes.

Some dishes begin in the upstairs and are transferred downstairs to be finished in the wood-fired oven. And after years of working in windowless, closed kitchens, Hoffman says he loves Shed’s setup.

“Working in an open kitchen is really amazing. Instead of being behind double closed doors, I can watch how people eat, what their fork goes into first. If we’re closed off, we don’t get that feedback.”

Looking out the window is a bonus too.

“Here, I feel like every day is a day off, just because I get to see what it looks like outside.”

While Hoffman admires French chef Michel Bras and New York City’s Daniel Humm, the cooks he looks up to most are in his family. His grandmother is in her 80s, but Hoffman says she can still outdo him in the kitchen. His mother sets the bar high too.

Hoffman is clearly in a good head space, and that comes out in the food.

“Four or five years ago, it really started to click for me, everything from textures to flavor profiles to who I am and who I want to be and who do I not need to pretend to be anymore.”

Most of all, Hoffman wants to be happy, and that means cooking, learning and creating. In addition to his talent in the kitchen, what’s most noticeable about him is his attitude. In an era of big-mouthed chefs with bigger egos, Perry Hoffman is a humble and happy exception.

Next ArticleDec. 22: Art Night Out in Napa